Review: Sipo - The Year Of The White Rose 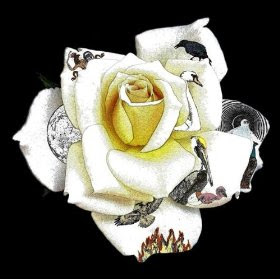 Freddie Sipo walked away from it all to create. Sipo gave up a lucrative job as a sound engineer in LA to build his own studio and create his own music, turning down several projects that would turn out to be huge commercial successes. Sipo admits that during the process finances got tight and the temptation was strong to go back behind the boards, but he held his ground. The result is a stunning alternative rock album entitled Year Of The White Rose. The album represents a death of the old giving way to a birth of the new, and the evolution of consciousness that results from walking away from the world and getting in touch with yourself.

Year Of The White Rose opens with He Who Has Ears Let Him Hear..., a song about tuning out from the constant push and pull of the world around you and learning to listen to your inner voice. The arrangement is stark and rhythmic and the vocals carry an uncommon urgency. Sipo comes off sounding like a cross between U2 and Radiohead here and at points throughout the album. Dare You -I- has an urgency to it that rivals the opening track, while Dare You -II- is almost more of a ballad. Sipo's vocals may lose a few points on technical issues here, but the heart that comes through more than makes up for any sonic mischance. White Light is the musical representation of a dream Sipo had while in his self-imposed seclusion and has a vaguely theatrical aspect to it. As noted previously, Sipo's vocals here are more about heart and ambience than technical perfection, but they work as the wailing inner voice struggling to be heard.

Lover If You Lay is a song about dropping out of the rat race and taking in the moments you are in, and how that pertains to the ability to love someone other than yourself. The song is melancholy, as if this realization came too late in one case. Burning Slow is highly contemplative, a melancholy examination of how bad thinking can derail even the best laid plans or intentions ("fear and doubt can lead to long, long years"). See Change is a wail to the universe; a statement of intent or perhaps even a self-demand for change. The vocal dynamics are about what they have been throughout the album, and the music fluctuates appropriately, see-sawing back and forth amidst three essential chords. The album closes out with Rise, a message of transcendence that is welcome but sudden, and therefore a little out of place.

Year Of The White Rose is stunning but retains its human flaws. The songwriting here is deep, with highly pensive lyrics presented in heartfelt vocals that run from the occasional musical mumble to extensive cathartic wails. Sipo isn't a great vocalist, and he's one you might tire of after a time, but his style works very well with the songs presented here. The only negative that really struck me here is that no matter where Sipo starts vocally he always ends up on the same level; singing at the very reaches of his range in a wail that is affecting but might border on annoying with enough exposure. The arrangements themselves are simple platforms embellished as Sipo sees fit from song to song. The two-drummer arrangement makes for highly rhythmic songs, and there is certainly room for fleshing out the sound with other instrumentation than what's offered here, but the album itself is a very positive experience.

You can learn more about Sipo at www.myspace.com/sipomusic. You can order Year Of The White Rose as a digital download from Amazon MP3.
Posted by Wildy at 5:54 AM