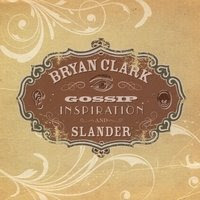 Bryan Clark is a true Renaissance man; a self-motivated, self-governed life-long learner and lover of music. With a Masters and Ph.D. in music, the singer/songwriter/arranger/session player and college professor seeks to understand himself and then the world through his music. Three highly successful bluegrass tribute albums with his band Honeywagon helped him learn the Bluegrass form (Sympathy for Bluegrass - A Tribute To The Rolling Stones; Grass Stains and Green Day, Bluegrass). Tiring of L.A., Clark relocated to Nashville, where he has released five successful and groundbreaking solo albums. Not one for the politics of Nashville or the traditional bent of Bluegrass, Clark works to bend genres and create new sounds from old. His latest album, the double-disc set Gossip, Inspiration & Slander, features an acoustic disc and an electric disc. With three songs shared between the two discs, listeners get a chance to hear the musical development of the creative process, but also get to hear the breadth and depth of Clark's stylistic range and talent. Clark's music has been featured on shows such as America's Next Top Model and Project Runway, as well as on networks such as VH1, FOX, ESPN and Oxygen.

The acoustic disc opens with Angelyne and a gorgeous, old-time country/bluegrass sound. Clark has a heart throb voice and the harmonies that surround him here just build an amazing aural canvas. The second track, Midnight Kisses is pure gold. The song has a great country sound with distinct pop sensibilities and a killer acoustic arrangement. The musicianship here is amazing. It’s one of those songs that stick in your head from the first time you hear it; you won’t be able to help yourself from singing/tapping along. Nights Like These is great pop country, but would benefit from an electric arrangement. Kiss The Bride is a bit of classic songwriting; a song about addiction and the choices people make. There is an implied inevitability to the song that is artfully told. For Predictions Of You, Clark explores a long distance relationship posthumously from the perspective of a man who can’t let go. The song walks the line between sweet and vaguely disturbing as the protagonist’s devotion becomes clear. The acoustic disc also features some fine instrumental work on Blackberry Blossom, Dom On The Saddlehorn, Midnight And The Harvest Moon and Bill Cheatum.

The electric disc gives a picture of the more commercial side of Clark, as well as an interesting stylistic tendency toward Texas Red Dirt Country. Two songs reminded me distinctly of Lyle Lovett in writing style. Bumper To Bumper sounds like it could be a Lovett outtake, mixing in the same wry wit Lovett is known for. Don’t Blame Me gets into some Texas-style acoustic blues, with song craft reminiscent of Lovett. This is the best song on both discs overall. That aside, I didn’t enjoy the electric disc quite as much as the acoustic. The sound here is solid and has strong commercial legs, but the musicianship on the acoustic disc is difficult to equal, much less top. The electric Angelyne just doesn’t live up to the acoustic version, and Midnight Kisses has a slick sound that will play well to Country radio, but loses a bit in the translation to electric instruments. Be sure also to check out The Way It Is, Nights Like These and All That Really Matters.

Bryan Clark is the real deal, a hard core country singer/songwriter with deep Texas roots who can play the commercial game but rights significant songs. Gossip, Inspiration & Slander is a classic, although I would recommend the acoustic disc first and foremost. Clark is an inestimable talent and this album could make him a superstar with the right breaks. Here’s hoping it happens. We need more Bryan Clark.

You can learn more about Bryan Clark at http://www.bryanclarkmusic.com/. You can purchase a copy of Gossip, Inspiration and Slander at CDBaby.
Posted by Wildy at 5:15 AM