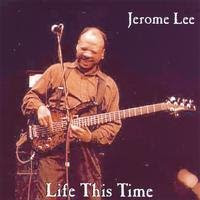 Jerome Lee’s been making music for many years. His professional career goes back 31 years when he was stationed in Japan with the US military and playing club and concert dates with folks such as Oy Takahashi, Miyanoue Yoshiaki, Keiji Yoshida and The 9th Of June. After returning to the US, Lee became something of an in-demand player while continuing to write his own material. 2003 saw the release of Life This Time, a soul and funk-filled play at modern pop.

Life This Time opens with Prettiest Girl, a funky jam with a classic soul sound. Lee sounds like he's singing through a time machine; a young James Ingram reborn. Monkey Slide brings on the funk with some nifty dance beats. Lee's musical dogma is understated here , turning Monkey Slide into a delicious and snarky that's made from piano, guitar, keys and vibes. Reach is a pleasant listen but fails to distinguish itself as an essential track. In My Heart is a classic R&B ballad, circa 1985; complete with saxophone and jazz guitar sound effects. Druk Op De Een is the peppiest song here, complete with disco beats.

My absolutely favorite song here is Time Gone Away, a deep and beautiful ballad that sounds like it's played on baritone guitar. An instrumental tune; Time Gone Away doesn't need words to convey the sad hopefulness that runs through every phrase, passage and note Lee evokes from those six strings. Time Gone Away is a master class in emotive guitar playing. Homecoming is a fairly typical ballad that is a pleasant listen but not particularly consequential. The album closes with Student Jam; three-and-a-half minutes on what sounds like a Casio keyboard with some very funky bass interplay. This is what some folks might describe as elevator music, although a close listen reveals more complexity and diversion than is generally found in the musical Soma of enclosed places.

Jerome Lee's Life This Time is up and down throughout, running from average to amazing. Lee is obviously incredibly talented, but tends to play in a genre/era mix that has been pretty much covered many times over. When Lee really lets his creative abilities out of the box and just plays, the music is sublime. Life This Time is a worthwhile venture.

You can learn more about Jerome Lee at http://www.jeromelee.net/. You can purchase a copy of Life This Time at www.cdbaby.com/cd/jeromelee.

I recomend this CD to anyone that loves music. I listen to it , over and over again, i just love it!