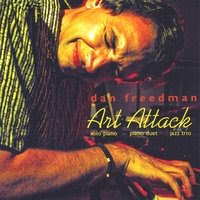 Prodigal Sons always return home. So it is with Dan Freedman, who returns to his roots as a jazz pianist after 20 years as a software entrepreneur. Showing how close a musician always stays to their music, it took nothing more than an early 2008 concert performance by Hiromi Uehara to throw Freedman a musical headwind that would turn his life once more to music. Born in London, England, Freedman has a weekly slot on BBC Brighton as "Dan The Piano Man" at eleven years of age. After moving to Canada with his family, Freedman majored in jazz piano performance on his way to completed both bachelors and masters degrees in computer science (hence the 20 year detour). Based now in Honolulu, HI, Freedman was so moved by the performance of Uehara that he began playing again the next day. By the end of 2008, he'd already recorded his debut album, Art Attack. Freedman has plans for two more albums in 2009, and I think it's safe to say that he's not looking back.

Freedman's press materials say his greatest influences are Oscar Peterson and Bill Evans. It's very evident on first listen to Art Attack that the jazz spirits of Peterson and Evans inform Freedman's musical consciousness. Freedman takes the impressionist style and runs with it on Art Attack. As with impressionist pianists this can be both a good and not so good thing at times. Freedman finds moment of musical glory embedded in the eight covers and two originals on Art Attack, but also finds moments where the impressions pile up too high upon one another and drown each other out. On balance, the passages and songs that work far outweigh what does not.

Art Attack opens with On Green Dolphin St., a classic played in trio form (piano, drums, bass). It's an egalitarian recording where no one instrument really is subservient to others, like a musical talk show where the instruments converse. There's an Bill Evans vibe that's evident in a relaxed reading of time signatures and the willingness to bend and shape melody lines into pretzels before returning them as they were, unharmed. Freedman pays tribute to Evans on Very Early, re-imagining the Chick Corea/Hiromi Uehara version in a style almost reminiscent of Vince Guaraldi.

Sweet Georgia Brown left me a little bit lost. The Maceo Pinkard classic is performed here as a piano duet, and ultimately that is just too much. The impressionist approach combined with a second piano in duet creates a bit of musical mayhem that was just too much for this listener. Chopsticks is a jaunty series of riffs on classic piano exercise that transforms into, among other things, Rhapsody In Blue along the way. This sounds like it was a lot of fun to play; the sort of divine inspiration that comes when a musician lets themselves have fun with the music.

The absolute highlight of the disc is Freedman's interpretation of Oscar Peterson's Wheatland for bass and piano. Freedman takes us through the gentle ebb and flow of Peterson's creation with a contrapuntal left hand and a minimalist bass line. Wheatland gets to breathe its own metaphysical melody in an inspired performance. Freedman gives an interesting turn next on The Beatles' Michelle, taking the Lennon/McCarthy classic off the pins of rock music and re-inventing it as classical/jazz hybrid. Freedman focuses on dynamic development throughout the song in moving from an almost Chopin presentation to Van Clyburn before falling back to the melodic heart of the song trailing the acoustic waters from whence it originally arose.

Laughing Child is a Dan Freedman original, and in some ways just doesn't belong on this album. Laughing Child is a pop song at heart with a vocal line that cries out of the piano for a singer and words. Laughing Child could migrate to either Adult Contemporary Pop or Broadway without much difficulty, and serves as a hint regarding the diversity and breadth of writing/performing talent that Freedman possesses. Art Attack closes with the surreal and rhythmic Marimba piece Lives At Stake. Lives At Stake sounds like something that might have shown up in session tapes for an early Pink Floyd album.

Dan Freedman comes home to music after twenty years in the corporate professional realm with an inspired debut album in Art Attack. While there are moments that don't work as well as other, the effort on the whole is very much worth your time. Mixing the influences of Oscar Peterson, Bill Evans, Brad Mehldau and others with unique and daring choices about structure, timing and harmony, Freedman takes chances that mostly work while giving us a hint of how broad a swath he might cut musically. With two more albums planned for 2009, this could just be the warm-up. A definite must for impressionist jazz fans, jazz piano fans, jazz-inflected pop fans, or people who enjoy an artist who can take you anywhere at any moment for any reason.

You can learn more about Dan Freedman or purchase a copy of Art Attack at http://www.dan88.com/. You can also pick up a copy at www.cdbaby.com/cd/danfreedman.
Posted by Wildy at 5:10 AM