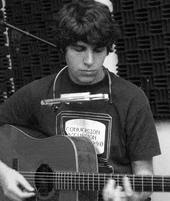 Originally from Dallas, Texas, Boston-based Glenn Yoder carries his influences with him like memories. They infuse his musical choices as seamlessly as breathing. The singer/guitarist of Boston's Cassavettes heads out on his own with the release of Okono Road. Trimming a list of fifty songs down to twelve, Yoder leads with his best foot on his solo debut, mixing radio anthems with ballads and some old fashioned Rock N Roll in a highly commercial yet likable debut.

Yoder opens with the radio-friendly anthem Broken, Beaten & Blue. It's an incredibly tuneful song that fits neatly into several demographics. Yoder's voice is pleasant and easy on the ears, and the arrangement is as smooth as silk. That polished feel carries over to Okono Road in a very accessible acoustic pop tune. A Thousand Ways looks to be a mix-tape favorite, mixing balladry and soul in a moving performance. Til The Wheels Fall Off is a great acoustic pop tune, very likely to end up in licensing or on the radio if offered in those venues.

Just Like is the best pure pop song on the record and likely to be a crowd favorite at shows. It's Gonna Take Time is a very close second. Yoder reminds me very much of Canada's The Waltons on several songs, but nowhere more so than on It's Gonna Take Time. Other songs of note are Home, Give Me A Moment and You Led Me Into Your Love.

Glenn Yoder infuses pop-savvy acoustic rock with elements of country and soul to full effect on Okono Road. At times he sounds a great deal like Jason Plumb of The Waltons (I consider this a supreme compliment). Yoder is a very polished songwriter who will appeal heavily to several demographics, and is probably one of the more likely artists to end up with songs licensed for prime time shows you'll come across. Okono Road is a smooth and accessible recording with significant commercial legs.

You can learn more about Glenn Yoder at www.myspace.com/glennyoder. No information was received on availability, so please keep checking back to Yoder’s MySpace page for more information.
Posted by Wildy at 5:20 AM