Review: Donohoe - Songs Of The Saints 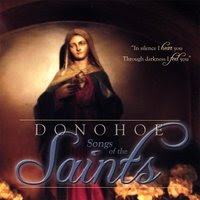 World musician Donohoe returns with his second album, 2008’s Songs Of The Saints. The follow-up to his 2006 debut, Shi Jing: Ancient Book Of Songs contains 10 modern hymns, each dedicated to a Saint or to God himself. Donohoe mixes styles both ancient and modern, utilizing ethnic instruments alongside modern synth, drum, bass & guitar to create a unique and unusual recording.

Songs Of The Saints opens with St. Michael The Archangel, a middle-eastern flavored song of praise and glorification set to an almost trip-hop beat. Vocalist Rachel Kresge adds a modern flavor that is both surprising and welcome. St. Francis Of Assisi mixes Chant with a rock arrangement, electronic effects and Spoken Word passages in Latin to create what may be the first religious dance mix. It's actually quite a catchy composition but may run thematically counter to the classic conception of St. Francis. St. Catherine Of Sienna is a quiet, introspective peace that seems to parallel the life of the 14th century saint. St. Brigid pays tribute to the mysterious Irish saint who is often called the Mary Of Gael. The musical choice here is somewhat confusing as Donohoe goes with a middle eastern flavor for a Gaelic saint. The arrangement is pleasant but just doesn't seem to fit.

St. Valentine seems to play off the modern commercial conceptions of the martyr. The fact that at least three separate St. Valentines can be identified in history and very little is known about one of them makes it difficult to encapsulate his history beyond the British originated celebration of love. Hail Mary is a lively arrangement is a love song of sorts to the Blessed Mother. It lacks the reverence found in some of the earlier songs on Songs Of The Saints but is built around some great jazz guitar licks and electronic tricks. Amazing Grace features a minor-key vocal version of the classic hymn set over a jazz-guitar arrangement that is musically busy but not terribly inspired. Sonata Lucia (2nd Movement) closes out Songs Of The Saints and is the most beautiful composition on the CD, with a heavy cello line that's so effecting you might have to sit down.

Donohoe offers up a mixed bag on Songs Of The Saints. Some of the compositions are absolutely inspired and moving, while others become a morass of good intentions. On the whole I'd say it's worth listening to. It's not that the compositions that don't particularly work are bad; they're just sidetracked by unfortunate musical decisions that are a normal part of the creative process. Music students and studying fans can find examples of both what went right and what went wrong here. The high moments (St Michael The Archangel, St. Catherine of Sienna and Sonata Lucia are really worth the price.

You can learn more about Donohoe at http://www.donohoemusic.com/. You can purchase a copy of Songs Of The Saints at www.cdbaby.com/cd/donohoemusic2.
Posted by Wildy at 5:00 AM