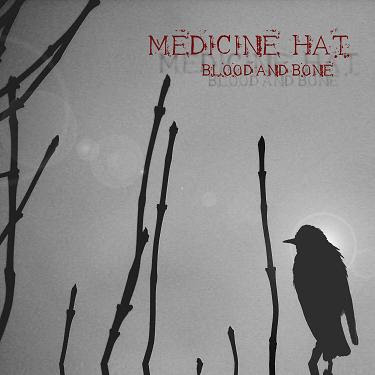 Chicago's Medicine Hat just can't stop writing and recording. Their latest release, 2008's Blood and Bone is their fourth album in under five years, and by far their most refined effort to date. Staying well within the bounds of the Classic and Southern Rock sounds they've always been steeped in, Medicine Hat attempts to provide a true 1970's era album experience. Broken into "sides" like an old school vinyl album, Medicine Hat provides both an electric and an acoustic set full on inspired songwriting and performing.

Blood And Bone opens with Take The Bait, a classic rock gem that is reminiscent of early Rolling Stones material. Take The Bait has a rough, unfinished quality to it that recalls Jagger & Richards at the top of their game. Emmett Till incorporate guitar work that would make Gary Richrath blush with glee, while Mudhen is a classic Rhythm & Blues rocker that you won't be able to get out of your head. South 55 shows off the country side of Medicine Hat, with a classic ballad that would have been entirely at home on 1970's country radio.
Twelve Lights opens the acoustic "side" of Blood And Bone with a sound that's reminiscent of Crazy Horse. Old Country Home is another classic country sounding song that probably deserves some serious commercial attention. Diary Of A Northern Soldier is a tremendous story song that you're not likely to forget any time soon. Cast as a country song, this could easily become a folk standard. Other highlights include Blood And Bone and El Dorado Suite.

Medicine Hat is not your typical, hard-working mid-western band. Lead vocalist and primary songwriter Demi Buckley is a special talent, with an ability to craft images and stories into a three-and-a-half minute country/rock song then many writers could put into a manuscript. His rough and tumble delivery combined with the incredibly tight play of Medicine Hat is just what the doctor ordered. Blood And Bone is a great album, although in some ways it may have been a better bet to split the album into two EPs. Nevertheless, you can't deny the talent here. Blood And Bone is very much a worthwhile listen.
Rating: 3.5 Stars (Out of 5)

You can learn more about Medicine Hat at http://www.medicinehatband.net/. You can purchase a copy of Blood And Bone at www.cdbaby.com/cd/medicineh4. Please note to be careful with the web addresses, as there is also a band named Medicine Hat in the UK with a very similar web address.
Posted by Wildy at 5:10 AM