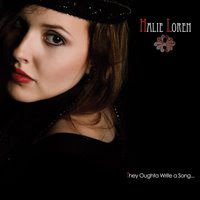 Halie Loren made quite an impression with her debut album, 2006's Full Circle. Loren proved she could write and perform songs that walk the line of emotional breakdown with a power and grace that are nearly unheard of in popular music. Loren, who is seemingly something of a musical restless heart, follows up with an album of classic jazz songs entitled They Oughta Write A Song. As good as Loren was on Full Circle, she sounds as if she were born to sing jazz. They Oughta Write A Song hits all the right notes from start to finish.

Starting off with the pensive title track, Loren's silky alto slides through the songs here like a hot knife through butter. Loren is smooth and full of a sensual grace that recalls Eartha Kitt at the top of her game. A Whiter Shade Of Pale is a gorgeous reading by Loren; she owns it like she wrote it, and it is one of the highlights of the CD. Blue Skies is performed in a mischievous, funky jazz arrangement that you won't soon forget. For all that's been said thus far, Halie Loren raises her game another notch on Autumn Leaves. The muted piano arrangement allows for maximum appreciation of Loren's virtuosic vocal, steeped in melancholy remembrance and regret.

Halie Loren really shakes things up on Fever. Get out your ice water, AC and oscillating fans. They won't be enough. Loren proceeds to find the heart of The Blues on God Bless The Child. I keep wanting to point out particular songs as highlights, but the difficulty is that everything here is just so good that the word highlight becomes meaningless. That being said, Perhaps, Perhaps, Perhaps is amazing. There is a mischievous quality to this performance that allows Loren to reach even higher and touch perfection for two minutes and twenty-one seconds. How Should I Know, The Dock Of The Bay and I Don't Miss It Much are up to the level that Loren has established throughout the album, and Summertime is absolutely glorious. Summertime is one of those songs that EVERYBODY who sings Jazz or Broadway tunes tries on at least once. As such it’s easy to listen to each new rendition with a jaded ear, but occasionally a particular performance will still pique interest. Halie Loren's version is full of soul; adopting the warm and easy feel of the prototypical summer's day that the song uses as its scenery. Loren waxes and wanes in intensity as she builds toward the song's peak. Her performance is a master class that avoids the attempt some singers make to overpower the song on the final chorus, letting the power of the song speak for itself.

I'm torn. After hearing Full Circle I very much anticipated Loren's next project. After hearing They Oughta Write A Song, it seems as if Loren was born with Jazz in her veins. Loren is one of those artists that can sing pop, rock, jazz and even Broadway without missing a beat. She could be equally successful in each realm. Hopefully over time she'll make time for both the pop/rock material and the jazz/show tunes. They Oughta Write A Song deserves to take a place among the great vocal jazz albums. Halie Loren becomes the first artist in the history of Wildy's World to have two Wildy's World Certified Desert Island Discs! They don't make them like this anymore.

You can learn more about Halie Loren and even purchase a copy of They Oughta Write A Song at http://www.halieloren.com/.