Review: Jeneen Terrana And The Howl Brothers - My Creation 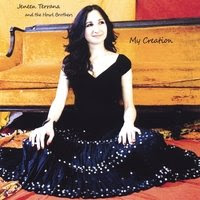 Jeneen Terrana And The Howl Brothers - My Creation
2008, Bitesized Records

New York City based singer/songwriter Jeneen Terrana is talented enough to be funny and still be taken seriously. Growing up in a Sicilian family in Buffalo, NY, Terrana was treated to an opera performance every Sunday after dinner by her grandfather. Terrana took a lot to heart from those performances, learning the person-to-person performance style that her grandfather imparted. She has translated that into an electric and engaging stage presence; writing and performing intelligent and witty songs with a distinct musical and melodic sense. Terrana's 2nd album, My Creation, features the incomparable Howl Brothers as Terrana's backing band. The resulting thirteen songs are a magical, musical tour de force you have to hear to believe.

Let's start with the voice. Wow just doesn't cover it. Terrana has this silky yet metallic vocal quality that can't be taught. She runs the gamut from beautiful balladeer to edgy alt-rock goddess and back in a single breath. Power, grace and deep hues are all part of the mix here. The Mountains is a prime example of this range as Terrana wrings every ounce out of the song. The Howl Brothers provide an amazingly balancing performance underneath, teasing the song out of its shell with playful licks and taunting musical drama. Terrana moves on both figuratively and literally with New Book in a bracingly honest resolution. New Book has this delicious blues undercurrent fed by the Americana/blues textures laid down by The Howl Brothers.

Terrana slows things down with Close To You, a sweet ballad sung against the backdrop of bare instrumentation. This is a diva performance. The song itself is amazing. I could even hear in my head the jazz arrangement that would turn this song into a standard. Terrana knows her theater as well as her music and takes this song all the way. Up next is Joseph Scott’s Turn On Your Love Light, a tribute to classic country with a modern twist. The Howl Brothers provide one of the tightest musical performances you'll hear on this one, and Terrana continues to stun and amaze as she spreads her wings and shows the breadth of what she's capable of. Life Goes On is a musical soliloquy about finding direction out of chaos. The song itself is amazing, although is a bit muddled on CD by the use of excessive reverb.

Terrana takes us to the dance floor with Something Sweet, a song made up of two cups of double entendre and a dash of spice. This is a classic song in the tradition of old-school country. Back in the day when innuendo needed to be buried deep in the lyrics it was an art form to push the envelope while staying within the rules. Terrana sings this one with a wink and a smile and a powerful vocal delivery you have to be in awe of. Bloody Valentine steps back to the 1960's in a dark minor key song that sounds like a pulp fiction outtake. Bloody Valentine marks one extreme in a performance that continues to expand the boundaries Terrana is willing to push. Vocally this is the most challenging and rewarding performance on the CD.

Train steps back from the brink of musical madness into a classic folk arrangement that's like a cool drink of water to clear the palette. Jeneen Terrana is sweet and vulnerable here in an honest, unguarded performance here. The Howl Brothers continue to impress by building both a musical and rhythmic tapestry to wrap around a song of sadness and loss. Money Tree is a step into rockabilly with guitar work reminiscent of Chet Atkins' distinctive style. It's a light moment that allows Terrana to have a little fun while The Howl Brothers get to play around in the background.

Beautiful Surprise is the most straight forward rock arrangement on the album. Melodically this is a beautiful ballad, although it doesn't play quite that way in the mix on the CD. I enjoyed it, but thought the guitar was mixed a little too high for my taste. Considering that and the use of reverb in Life Goes On are the only minor issues I could find on the entire disc I'd say it’s nothing to worry about. Little Fish is a sweet song with a powerful positive message that finds Terrana at her most personal and personable. Terrana's cover of Dolly Parton's Jolene is classic; even better than the original (sorry Dolly). The album closes out with the title track, My Creation. The song serves as epilogue and autobiographical soliloquy of hope and the power to change, and completes a primo performance from Terrana and The Howl Brothers.

Jeneen Terrana is a special talent, and My Creation is one of the most breathtaking introductions to an artist I've ever experienced. It makes me sorry I missed her debut in 2002. Buffalo, NY should be proud, and New York City music fans should make every effort to see and hear the musical gem playing among them while they can. If there's justice in the world of music, New York City won't be big enough to hold Terrana in the long run. Between her voice and songwriting talent, and the impresario backing band The Howl Brothers, there's nothing this musical outfit can't accomplish. My Creation is, without a doubt, a Wildy's World Certified Desert Island Disc. It's a classic album that deserves to be heard far and wide. What are you waiting for?

You can learn more about Jeneen Terrana at http://www.jeneenterrana.com/. You can purchase a copy of My Creation at www.cdbaby.com/cd/jeneen2.
Posted by Wildy at 5:10 AM