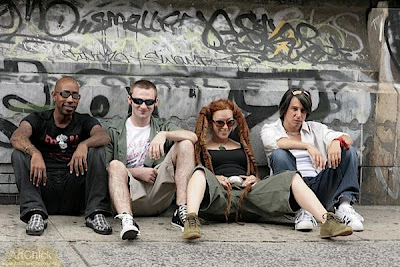 Underground Logic are the hip-hop darlings of the Jersey Shore. Incorporating elements of rock, funk and soul into their fresh blend of hip-hop, Underground Logic aim for the sort of musical domination reserved for trailblazers and superstars. Lead vocalists Tiffany Sterling lays down devastating rhymes over the live band sounds created by Brian Keith (guitar), Kenny Peterson (drums), Colin Thompson (bass) and Salli Redd (backing vox). Underground Logic is currently working on their debut album, and sent along this four song demo for review. It sounds promising.

The demo opens with Rainbow Gangsta, with a driving beat and lyrical style that is intense but only gives a glimpse of what Sterling is capable of. Drums For Me expands on Sterling's initial offering in duet with Salli Redd. The vocals are sharp and clear and very pleasant to listen to, even if the melodic content here is repetitive and bland. Poison sounds like the musical ravings of lunacy before breaking into a typical hardcore gangsta diatribe. The rhymes are competent but don't really stand out as something special, and even the chorus lyrics sound somewhat forced. Even brings the tone and tempo down in a pleasant R&B/disco offering that may get some attention at commercial radio.

Underground Logic is a talented outfit angling for a record deal or some other form of the big break. Vocalist Tiffany Sterling has a great sound that isn't truly used to its full potential here. The Underground Logic demo shows a band struggling between its desire to be gangsta and an innate musical sense that is drawn more to the melodic side of music. The struggle is there although it may not be readily apparent without several listens. Underground Logic is a band to watch, and they'll go a long way if they don't get too wrapped up in what critics like me say about them.

You can learn more about Underground Logic at www.myspace.com/undergroundlogicmusic. Keep checking their website for upcoming release information and availability.
Posted by Wildy at 5:00 AM