Review: Ryan Delmore - The Spirit, The Water And The Blood 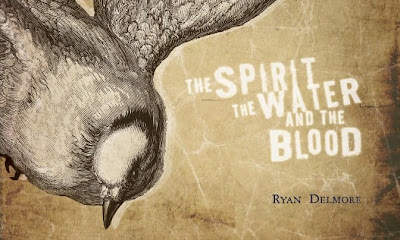 Ryan Delmore - The Spirit, The Water and The Blood
2008, Varietal Records

Ryan Delmore has been a worship leader at the Five Cities Vineyard Church in Arroyo Grande for the past fifteen years. In that time he’s written scores of songs while leading worship in his church, and even managing to tour once in a while. Infusing country, folk, gospel, rock and soul with a Christian message, Delmore crafts a steely blend of religious Americana Delmore’s latest album; The Spirit, The Water and The Blood hints at influences as diverse as Bob Dylan, Sam Cooke, Tom Petty and The Staples Singers.

Ryan Delmore has either created one of the best gospel albums I've heard thus far in 2009 or one of the best Americana albums I've heard in 2009. It's hard to say which, because it's both. The Spirit, The Water and The Blood was born out of Delmore's love of God, but also pays direct homage to classic Americana sounds. Delmore's love of the sounds of artists such as Bob Dylan, Tom Petty and Neil Young is evident and shines through clearly here. Delmore's love of God is equally evident, and I suspect that the religious community will embrace this album enthusiastically. Delmore is supported on the album by guitarist Marc Ford (The Black Crowes, Ben Harper) and his wife Kirsten Ford on backing vocals.

Delmore opens with Mercy, a pure singer-songwriter take on forgiveness and redemption. This is a classic country arrangement that may have commercial potential in secular markets as well. Sing Like Mary Sang plays more into the gospel realm, and Delmore's slightly gruff vocals are perfectly at home here. Provide For Me goes down the country path once again in a fairly straight up country/rocker. The guitar work here is amazing. Country fans will dig this song even if they don't buy into the lyrical content. Teach Me All Your Ways is a quiet ballad that is as much a prayer as it is a love song. Harmony vocals from Kirsten Ford enlighten this song with a sense of quiet beauty.

Sacred has a Ryan Adams/Whiskeytown sound that is both tired and inspired. The energy level on this one doesn't really match the lyrical content, but the arrangement is gorgeous. Jesus' Name is a classic country/pop tune that could garner significant play on pop/country radio. Other highlights are Nowhere To Be Seen, True Religion and Love Of God.

Ryan Delmore is the sort of artist who could bring Gospel music more fully into the popular realm. A great songwriting talent and a strong, soulful voice help Delmore make The Spirit, The Water and The Blood an eye-opening experience. Even if you're not into message you'll respect the music here. Ryan Delmore is a special talent.
Rating: 4 Stars (Out of 5)

You can learn more about Ryan Delmore at http://www.ryandelmore.com/. You can purchase a copy of The Spirit, The Water And The Blood at Vineyard Music.
Posted by Wildy at 5:00 AM