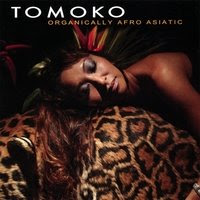 Growing up in Osaka, Japan, TOMOKO fell in love with American Soul Music. She credits Stevie Wonder’s Songs In The Key Of Life for changing her life; bringing out the desire in her to be a soul singer. Despite cynicism from family, TOMOKO packed up and moved to New York City. That decision has led to the recordings and release of Organically Afro Asiatic, TOMOKO’s debut EP. Produced by JAMBA, TOMOKO has created a set of songs steeped in classic 1970’s soul with a modern edge.

Organically Afro Asiatic opens with Mercy Joy And The City, a tribute to the heart of New York residents. The first thing that strikes you about TOMOKO is the smoothness and beauty of her voice. TOMOKO could sing the phone book and people would line up to listen. Mercy Joy And The City takes this striking voice and sets it against a classic NYC Soul vibe, creating a potential commercial hit. Love Me is an in your face come on song set to a bossa nova beat. TOMOKO melts more than a few speaker/headphone wires on this tune with a steaming, sultry sensuality that is almost palpable.

The big potential hit here is Geisha Girl, a classic soul side complete with Tower Of Power style horns. Geisha Girl is a smoking hot declaration of independence from stereotypes of Asian-American performers. TOMOKO is in your face here, but with intelligence and perhaps even just a touch of wit. She eschews the American style of toughness based in bravado for a classic honesty based in real toughness. The results are a breathtaking instant soul classic that is bound to break radio boundaries and offer many licensing opportunities. Promise is another song with real commercial viability, offering sweetness in the form of a fairly standard pop ballad.

Should I heads straight for the disco floor, in an S.O.S. Band style groove. TOMOKO is at her vocal best here, easily transitioning between vocal registers with a sense of grace and beauty that’s often missing in pop music. The album ends with Hold On, a meandering soul ballad with a hopeful message and a heavenly melody.

TOMOKO is the real deal. She will benefit from her look and status as an Asian woman in American pop culture, but to lay any potential success for TOMOKO at the feat of such things is to do her a disservice. TOMOKO is a first-class vocal talent. Working with JAMBA, she has created a debut that is soulful, sexy, and sweet; a surefire hit. There are at least two songs here with major commercial potential, and don’t be surprised if you hear TOMOKO on TV and movie soundtracks in the next year or two. Her versatility performing everything from Soul to Jazz and even Opera means there are a lot of layers to TOMOKO we haven’t even seen yet. TOMOKO has the potential to be an international star. Organically Afro Asiatic is a great start.
Rating: 4 Stars (Out of 5)

You can learn more about TOMOKO at www.myspace.com/TOMOKOmusic or http://www.TOMOKOmusic.com/. You can purchase a copy of Organically Afro Asiatic at www.cdbaby.com/cd/TOMOKOtunes.
Posted by Wildy at 5:00 AM