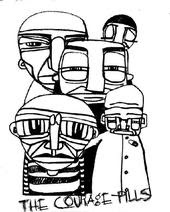 You can learn more about The Courage Pills at www.myspace.com/thecouragepills or http://www.thecouragepills.com/. It does not appear that The Courage Pills have any CDs or MP3s for sale online at this time. You can stream six of the songs discussed in this review on their MySpace page, although Rabbiteater is curiously not available. Perhaps if you message them through the MySpace account they’ll sell you a copy of The Courage Pills.
Posted by Wildy at 5:00 AM