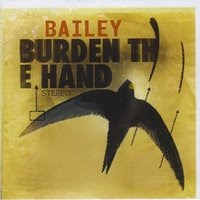 Ohio native Chris Bailey has released six albums since 1999, both individually and with his band Moonlight Graham. Weaned on 1970's singer/songwriter types such as Jim Croce, Cat Stevens, Van Morrison, Paul McCartney and John Lee Hooker, Bailey writes in a bluesy folk style that would have fit in with the folks above while retaining a modern edge. Bailey's latest release, Burden In The Hand is intensely personal and forthright, using a broad range of instruments and sounds to tell a series of 7 stories to highly entertaining and complex musical arrangements.

Bailey opens with Sunny Road, a blues flavored folk rocker that would do Van Morrison proud. The arrangement is bare through most of the song but builds to a delicious crescendo as the chorus concludes. Bailey delves deeper into the Blues on Burden The Hand. Bailey's voice is incredibly soulful here with just the right mix of gruffness. The song builds from barebones to a big jam surrounding the tasty guitar riff that drives the song. This is my personal favorite song on the disc. River sticks with the blues sound and brings out a vocal quality that you hear before now but becomes extremely plain on River. Bailey sounds very, very similar to Dave Matthews. The main difference is that whatever Matthews is vocally, Bailey is more so. Bailey has just a bit more gruffness to his voice, and vocally has a more compelling sound than Matthews (based on tone, power, etc.). DMB fans will find themselves doing double takes when they first hear Bailey.

On Top Of The World is more in the singer-songwriter style Bailey grew up with. The song is a bit of genius writing. Bailey sounds like no one but himself here, and the performance is excellent. Between The Tracks sounds like Bob Dylan meets Billy Joel stylistically. It's pleasant singer-songwriter stuff but perhaps doesn't stand out quite the way some of the other material here does. The EP closes out with In Your Hands and Flowers, two musical short stories that are pleasant closure to a strong introduction.

Chris Bailey offers a memorable performance on Burden The Hand, proving that the singer/songwriter genre is alive and well. Highly introspective and reserved, Bailey offers up 7 vignettes in song that are entertaining and gratifying listens. The market for Burden The Hand probably veers strongly toward older music fans, but Bailey will find adherents across all age groups. There's nothing glitzy here, just good old fashioned music.
Rating: 3.5 Stars (Out of 5)

You can learn more about Bailey at www.myspace.com/baileyandthe. You can purchase a copy of Burden The Hand at www.cdbaby.com/cd/chrisbailey.
Posted by Wildy at 5:20 AM

Nice Album! I just found it on iTunes. THanks 4 the tip!

Thanks for the kind words Wildy. I appreciate your time and ears. Be well, go well - Bailey

Good record. Although Bailey played all the instruments all the songs don't sound the same. Good Job.