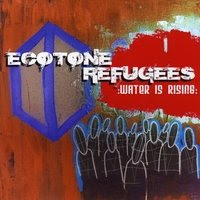 Ecotone Refugees come barreling out of the vibrant Brooklyn Indie rock scene with a sound that is reminiscent of Black Sabbath, Pink Floyd and Queens Of The Stone Age without really sounding like any of them. A modern rock psychedelic band with a shredder on lead guitar and a vocalist who sounds like Ozzy Osbourne had a child with Eddie Vedder is going to attract attention, and Ecotone Refugees definitely attract attention. Their debut album, Water Is Rising was released in 2008 and makes quite an impression.

Ecotone Refugees are a conglomerate of true music professions. Johnny Young lends vocals, guitar, Moog and keys. Outside of the band he is also a producer and composer who has provided music for the Oprah Winfrey show. Sean Egan (guitar, Moog, bass) is a shredder in the first degree and loves to play with dynamics and time signatures. David Weise chips in on vocals and bass, and drummer Michael Galante is a Berklee College of Music grad. Suffice it to say Ecotone Refugees aren't your typical rock bruiser. It's no surprise then how varied and complex the songs on Water Is Rising truly are. The album opens with Marathon, an Ozzy-era Sabbath-esque rocker built on some very interesting guitar work. Wake Up is a big, straight up rocker with Moog effects and an anti-war message. This is probably the least compelling song on the album, but still a decent listen.

Losing Your Faith is the sort of heavy rocker that would have ruled AOR radio in the early 1980's. Psychedelic bridges and big driving guitars give this song a distinctive sound that stands out. Lost In You is an interesting mix. There's a pop sensibility in the hook-laden song (even if the hooks are anti-pop). The chorus is classic punk rock and the song is a clear dichotomy that reflects the divergent sounds Ecotone Refugees pursue. Cyclone is a raucous old-school rock tune based on a classic Moog sound and surf-style guitar. B-Squad Brothers is feel good Rock N Roll in a classic 1960's format. Water Is Rising is pure psychedelia, Pink Floyd style. Nine and-a-half minutes of pure rock ambience.

Ecotone Refugees march musical ground that's been covered for years and yet they seem to find a way to sound fresh and new even while paying tribute to some of the biggest names in Classic Rock. Water Is Rising has the same sort of iconic feel about it that Pearl Jam had in their early days. If you love great classic rock sounds with a modern edge, then Water Is Rising (and Ecotone Refugees) is for you.
Rating: 3.5 Stars (Out of 5)

You can learn more about Ecotone Refugees at www.myspace.com/ecotonerefugees. You can purchase a copy of Water Is Rising at www.cdbaby.com/cd/ecotonerefugees.
Posted by Wildy at 5:00 AM