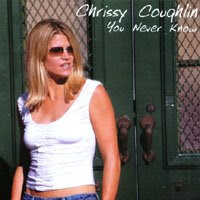 A couple of weeks ago we reviewed Chrissy Coughlin’s most recent release, Look Ahead. In the wake of that review we received her debut CD, You Never Know for consideration. Here is what we found!

You Never Know opens with Don't Do It Alone. The sound is a mix of straight ahead rock with a taste of Americana. Coughlin sounds a bit like early Natalie Merchant. The sound and songwriting here are a bit rougher than on Look Ahead Coughlin shows flashes of what is to come however. Freedom opens with a guitar progression that could have been lifted almost identically from The Lowest Of The Low's Just About "The Only" Blues. The progression on Freedom is slower and lasts much longer into the song, but the similarity was so striking I had to go back and pull Shakespeare My Butt and make sure I wasn't misremembering.

Sammy starts to show some of the songwriting promise that Coughlin has grown into with time. Coughlin sounds a bit tentative through the first two songs, but settles in here to give a strong performance. Sweet Release is something of a coming of age song for Coughlin. It is intended to be forceful but suffers somewhat from the same tentativeness that waylaid the first two tracks. Coughlin finds her form on Hallelujah, a mellow upbeat pop tune. She still hasn't found the voice that she'll later unleash on Look Ahead but you can hear her start t come into focus here a little bit. On With The Show is the highlight of the disc, as Chrissy Coughlin comes more and more into her own, and Rain cinches the fact Coughlin is clearly coming on strong at the end of You Never Know.

Chrissy Coughlin is a talented vocalist and songwriter. You Never Know is her debut recording and is, at this point, six years old. What we see and hear on You Never Know is a young singer/songwriter struggling to find her identity as an artist. Coughlin fights hard and finishes strong, shaking off the tentativeness that dominates the first half of the album to proclaim herself ready to be heard. In conjunction with Look Ahead this is a great listen because over the course of two albums you can really hear Coughlin develop as an artist. You Never Know on its own is a decent release, but stands as an important monument in the development of Chrissy Coughlin.

You can learn more about Chrissy Coughlin at http://www.chrissymusic.com/. You can purchase a copy of Look Ahead at www.cdbaby.com/cd/chrissycoughlin.
Posted by Wildy at 5:10 AM

Labels: Chrissy Coughlin, Natalie Merchant, The Lowest Of The Low