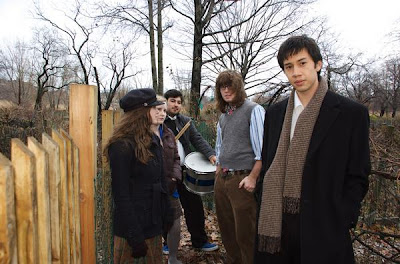 Adrien And The Fine Print come out of Boston's Back Bay with a rich tapestry of sound based in classic Americana roots and quality songwriting. The band's debut EP, Honey For Bees, was recorded in one day, with at most two takes per song. Adrien And The Fine Print attempted to capture the classic sound of the albums that influenced them most, opting for a less modern, less air-tight recording method that happens to bring out more of the live, organic sound of the band. Adrien, Elizabeth, Alex, Renee and Joey have something to say. You might want to listen.

Honey For Bees opens with A Ghost You Know. Vocalist Adrien sounds like he falls somewhere between Dylan and Ron Sexsmith, and the guitar violin bookend the vocals in a pleasant valley of sound. The stereo mix here is positional; with the violin on your right and guitar on your left and Adrien in between. It's almost as if you're sitting in at a house concert with the band right in front of you. The performance is very comfortable with good energy. Up next is Honey For Bees, a classic 60's sounding folk-rocker. Adrien just has this easy singing style that seems to work for most any song, and the harmonies here are a pleasant cushion to carry his voice.

Future Perfect is a strong, straight-ahead Americana arrangement in the same vein as A Ghost You Know. Santa Ana Winds takes on more of a country/rock feel and is probably the most commercially oriented song on the album. The EP closes out with Virginia Wasn't Always For Lovers, which takes on more of a classic country sound, complete with twangy guitar and harmonica. This is the sort of song you expect to hear on some prime time television drama as background music, so don't be surprised if it shows up somewhere in the future.

You can learn more about Adrien And The Fine Print at www.myspace.com/adrienandthefineprint. Adrien And The Fine Print will release Honey For The Bees on Friday, February 13, 2009 at La Luna Café in Cambridge, MA. Keep checking their MySpace page for availability. In the mean time you can stream the songs on their MySpace page.
Posted by Wildy at 5:10 AM