Review: Rob Blackledge - Inside These Walls 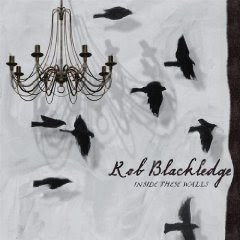 Rob Blackledge - Inside These Walls
009, One Revolution Entertainment
Rob Blackledge was blessed with a world of talent and many options. A baseball player in high school, Blackledge graduate with scholarship offers and scouting interest from the Florida Marlins, Atlanta Braves and Houston Astros. Blackledge had other ideas. Having been bit by the performance bug in tenth grade, Blackledge enrolled in Belmont University is Nashville, renowned for its music business program. After winning a school talent competition and beginning to play out, Blackledge was invited to tour with Dave Barnes. Blackledge drove around the country in 2006 play 100 or so dates and building a grassroots following. The next big break was co-writing Runaway with friends Love And Theft, a country radio hit that got Blackledge a recording deal with One Revolution Entertainment. The fruition of all these little steps in Blackledge's debut album, Inside These Walls, due out on September 15, 2009.

Blackledge seems to have a special talent for blending styles and sounds. You'll hear moments on Inside These Walls that will remind you somewhat of The Beatles, Ben Folds and Jason Mraz, among others, but in the end the sound is all Rob Blackledge. Should Have Known Better starts out with a double, sounding like a mid-career Beatles tune interpreted by Folds. Infectious hooks and a melody that sings itself to you make this a winner all-around. Blackledge has one of those easy voices that make you stop and listen; the pop arrangements he lays down on Inside These Walls frame that voice perfectly. Everything is the sort of ballad that could help Blackledge own the billboard charts for a few weeks. With crossover potential between Country and Pop radio this is a potential monster. Early Morning Riser is a great feat of capturing a moment in song; looking forward to a time when he'll be reunited with a loved one. This is another one of those tunes with serious commercial implications; all it needs is the right break.

Sweet, Sweet Lady continues the barrage of romance tinged pop gold. This might be the best song on the disc, infusing the Blues into an easy Pop arrangement that may have the biggest potential commercial impact of any song on the disc. A bridge reminiscent of Phil Spector-era Beatles just ups the explosive potential of this song. Blackledge pays tribute to his fiancée (sorry ladies) on Granola Girl, using a Reggae beat and a lyric vocal line to paint a picture of utter contentment and peace with the love he's in. Your City, My City is a lush sound painting with gorgeous vocals and harmonies and a guitar part that wraps around it all with an air of perfection. From a pure sound perspective this is the best composition on the disc. One Step Away pictures a man coming out of the shadows to show his love for the girl he's been there for; someone who will stand back and hide his love no more. The melody here is phenomenal. The Hard Way moves Blackledge from deciding to declare his love to actually doing so in one of the most romantic songs of the year. The arrangement, done up with full orchestration is lush and has a classic romantic movie feel to it. Blackledge turns out the lights with Our World, a song exhorting listeners to take care of one another. It's a message of universal need and universal succor and is particularly apropos in the current economic environment.

Rob Blackledge strikes gold with Inside These Walls, combining archetypal melodies with thoughtful, heartfelt lyrics and a pop sensibility that's nothing short of breathtaking. Don't be surprised if this is one of the breakout pop albums of the year. For Rob Blackledge it's not a question of if, but when.

You can learn more about Rob Blackledge at http://www.robblackledge.com/ or www.myspace.com/robblackledge. Inside These Walls will be released on CD on September 15, 2009, but you can download the album now from his website!
Posted by Wildy at 5:20 AM