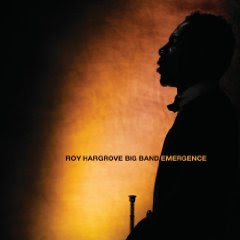 There are few modern era jazz musicians as prodigious as Roy Hargrove, who has turned out eighteen albums in just under 20 years, not including all of the side projects he’s done in that time. Discovered by Wynton Marsalis, the Waco, Texas native has two Grammy Awards under his belt and is known the world over. On August 25, 2009, Hargrove releases his eighteenth album, Emergence, featuring two tracks with Roberta Gambarini on vocals.

Emergence opens with Velera, a middle-of-the road jazz composition heavy on brass. It's a soothing tune, more for the background than the foreground and is a great listen. Mrs. Garvey, Mrs. Garvey has a distinctive Be-Bop feel and sounds like it might have come right from an early-60's Vegas soundstage. My Funny Valentine features Hargrove at his most lyric and musical. It's an instrumental take on the song but the vivacity and oomph to be much more than just background. Mambo For Roy is an extremely busy composition; it’s not my favorite song on the disc but it's decent. I simply feel as if Hargrove is trying to do too much here. September In The Rain recalls an era of big band jazz that will have you reaching for your best lady or best fella and skipping off to the dance floor. This is one of the best all-around performances on the Emergence. Every Time We Say Goodbye features the vocal talents of Roberta Gambarini in a performance that sounds like it just stepped out of time. La Puerta brings a distinctive Latin feel to Emergence with Gambarini once again on vocals. Emergence closes out with Trust, a lovely down-tempo number that's more of a mood piece, full of tightly compressed instrumentation and a melody that's as pretty as can be.

Hargrove delivers another excellent album in Emergence. This isn't in any way surprising and long-time with fans will be happy. There are no real chances taken here, but the album is a great listen, and the introduction to vocalist Gambarini is a welcome treat.

You can learn more about Roy Hargrove at www.vervemusicgroup.com/royhargrove or www.myspace.com/royhargrove. Emergence drops on August 25, 2009. You can pre-order copies from Amazon.com. The album will also be available through most digital retailers, including Amazon MP3 and iTunes.
Posted by Wildy at 6:13 AM

Why the low rating? Sounds like you just listened to the album once and wrote the first thing that popped in your mind after each one.

I'd say that on average I listen to an album 4-5 times before writing a review, but it can vary. This album, if I recall correctly, was 4 listens, and didn't engender any spectacular revelations or new ideas. It was a safe album for Hargrove that didn't push the bounds at all. Hence the 3.5. Reviews reflect the material more often than not, hence a great inspired album usually gets an inspired review. A safe album likely engenders a safe, descriptive review.