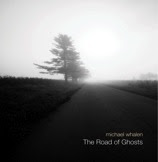 Michael Whalen might be a name you’ve never heard, but you’ve heard his music. Whalen has over 500 television scores and several dozen short and feature film credits to his name. Whalen wrote the opening theme to Good Morning America, and has written for Oprah Winfrey, Martha Stewart, As The World Turns and Inside Edition, to name a few. He won an Emmy and BMI award for his score of PBS’ America At The Crossroads miniseries, and also scored PBS’ Slavery And The Marking Of America. If you haven’t heard any of these, perhaps the commercials he’s scored for clients such as Apple, Coca-Cola, Disney and Nike have touched your consciousness. In any case, Whalen is prolific. Much of this writing is done from the shadows as far as the public is concerned, but Whalen steps out of the shadows with a solo album, The Road Of Ghosts.

The Road Of Ghosts opens with Original Sin, a prayer for forgiveness in song. The arrangement is decent, piano-driven soft-rock. Whalen sounds a bit like a cross between Elton John and Steven Curtis Chapman here. Vanilla is a love song that ends up sounding a bit too forced to really work but has some nice thematic elements in the melody. The Road Of Ghosts is about being haunted in one's dreams by regrets; it's a powerful tune that turns into a declaration to no longer be so afflicted.
Blink Of An Eye finds Whalen sounding very much like Elton John, both vocally and in piano style. All Of Me takes another stab at the love song genre and works well; there's a feeling like the song take a bit too long to get where it's going, but the sentiment is strong (and well-written) and the arrangement fits perfectly. I Am is a song about believing in yourself and making your own destiny; starting with what you think and believe. It's a strong, positive message in a mellow pop/rock arrangement that's a bit too positive and too mellow for pop radio but would do well on the Adult Contemporary circuit. The song also reminds us that sight is as much about what we're ready to see as it is about what's there. The Road Of Ghosts closes with Seasons Of Light, a positive song that just doesn't seem to have the energy of its own convictions. There's a vaguely spiritual element here blended with a love song, but it comes across as fairly cliché.

The Road Of Ghosts is a bit uneven but shows a decent songwriter and performer with middle-of-the-road adult-oriented pop potential. Fans of Delilah's show will likely enjoy Michael Whalen's material, and there's a distinct spiritual/Judeo-Christian ethic at work on the EP, but it just didn't grab hold of me as a listener.