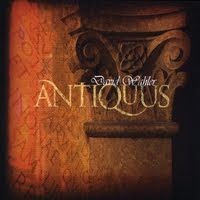 David Wahler – Antiquus
2009, Darius Productions
David Wahler discovered at the age of seven that he could play piano. With no lessons and no experience at the keyboard, Wahler found that he could recreate songs from church or the radio on the piano as easy as inhaling and exhaling. Years of training and performance helped Wahler polish his craft until he found himself serving as a composer and music director for Off-Broadway productions in New York City. Returning to his home base of Chicago, Wahler continued to perform with the Rockford Symphony Orchestra and New American Theater. Wahler took a couple of professional turns, both successful, but never found the satisfaction he found in music. Wahler treats his talent as a gift and aims to share his love of music with the world around him. Wahler's debut CD, Antiquus, has roots and influences in music by Gabriel Faure, Eric Satie, Scarlatti, Stravinsky, Chopin and Rimsky-Korsakov as well as modern works by Brian Eno, Peter Gabriel, Kitaro and Liz Story.

Antiquus opens with the title track, an ethereal, dreamlike composition in the same vein as some of John Tesh's more popular work. A lovely piece where the theme is trade back and forth between piano and various synth sounds. Delphi takes an Eno-esque turn, delving into a vibrant, staccato electronic crown with deep currents running beneath. Kyoto Mist introduces a Japanese-influenced coat around a Windham Hill style theme. The sparse nature of this composition carries with it a singular beauty and a significant risk, as it sounds not dissimilar from the sort of music you might hear on nature CDs found in specialty stores in your local mall. From the mundane to the memorable, Wahler sinks into Apollo's Lyre with a melody for the ages; simple, noble; beautiful. Wahler reaches cinematic heights on Teresa. There's a feeling of time and place to this track that belies the simple musical narrative of the melody. The occasional voiceover aside (which frankly is more distracting than anything), this is a beautiful composition.

Hyacinthus draws on vague Native American musical sounds mixed into New Age piano and synth overlays and a virtual chorus of angels providing vocal support. The "violin" (synth) line here provides illumination, as if it were the sun itself set aloft into the sky and climbing ever higher. The melody here is gorgeous although it does get a bit too cyclical at times. Lune Mysterieuse has a fairly generic sound that is pleasant but won't stick in your mind for too long, whereas Angelis is dripping with a drama and tension that is theatrical. Over the course of six-and-a-half minutes, Angelis resolves tension with rambling, contemplative passages that work their way back and forth from tension to peace without ever resting. This ambivalence of place leads to the closing track, Ancient Dawn, which recedes ever so slowly into the distance and passes into the inaudible ether in its closing seconds.

David Wahler walks a fine line between commercial New Age and composing meaningful music that people will want to hear, not simply be lulled by. While there are definite lulling moments on Antiquus, the material offered here is a bit too good to simply be mood or background music. Some of the effect choices (particularly the one-word, ethereal voiceovers) waste some of the overall effect of the music, but on the whole Antiquus is top notch. I highly recommend you spend some time David Wahler if your interests run to New Age and/or Modern Classical music.

You can learn more about David Wahler at http://www.davidwahler.com/ or www.myspace.com/davidwahler. You can purchase Antiquus as either a CD or download through CDBaby.com.
Posted by Wildy at 5:10 AM