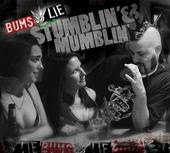 To fend off questions from rabid Sublime fans, no, this isn't another Sublime side project. (Sublime released an underground record a number of years back under the band name BumsLie). Bums Lie is a Charlotte, North Carolina quartet with a serious love of Reggae, Ska and Punk who adds touches of 1960's Motown and Roots Reggae into their music. Since coming together in 2001, Bums Lie has released three albums and opened for Damien Marley, Yellowman and King Django among others. Bums Lie's latest CD, Stumblin' & Mumblin' is a live recording from a show a 2009 show at the Visulite Theater in Charlotte, North Carolina.

Stumblin' & Mumblin' opens with Brokedown Soldier, a wartime tale with a Reggae beat. It's a highly musical arrangement with a strong melody line. Edge Of Civilization is guaranteed to get you moving; it's probably one of the more enjoyable tunes I've heard of late. Just A Game has a gentle Reggae arrangement with real potential for Pop crossover. This is a first class piece of songwriting that deserves real attention. You Do Me Wrong is another song with real crossover potential. I wouldn't be surprised to hear this tune licensed for movies or television in the future. The album closes out with three "FM Editions", presumably radio-friendly versions without objectionable language: Edge Of Civilization, Captivating and Just A Game, before launching into an encore of Stand By You.

Bums Lie's Stumblin' & Mumblin' is decent. There's not a lot of variety in sound or dynamic on the album which causes Stumblin' & Mumblin' to drag on, particularly toward the end of the disc. The voices and instrumentation are all fine, and it’s clear from the disc that Bums Lie has a solid local and regional following. I don't know if Bums Lie dispays enough here to justify being a big time band, but a solid career is certainly within reach.

You can learn more about Bums Lie at www.myspace.com/bumslie. You can purchase a digital download of Stumblin’ & Mumblin’ at Amazon MP3.
Posted by Wildy at 5:10 AM