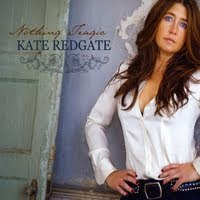 Kate Redgate has never let a life less than easy stand in the way of her creative process; indeed her choices and the results have fueled her songwriting for the better part of 20 years. Redgate was adopted from Scott Air Force Base in 1970 and spent much of the first 16 years of her life on a farm in Southern Illinois. A stint in Foster Care at the age of 16 before several years of street life ensued where Redgate learned the craft of music hanging out in clubs and getting to know musicians. Children and single motherhood kept Redgate from performing a great deal for a number of years, although she began to reconnect with performing in 2001 following the recording of a self-titled demo CD. In 2005, Redgate shattered her arm in an accident and faced the possibility she might never play again. Things worked out for the better, and Redgate comes back in 2009 with Nothing Tragic; a reflection on all that's come before and a personal attitude that drives Redgate on toward the future.

Sitting down listening to Nothing Tragic isn't something you take lightly. It's like catching up with an old friend who's had a lot go under the bridge since last you spoke. With a dark and plain-spoken manner that speaks of Bonnie Raitt, Kate Redgate spins autobiographical musical yarns about a life that hasn't always been kind but has born good fruit. Last To Know underlines this spirit, with Redgate coming to the realization that mistakes are nothing to fear and that failure and freedom are co-equal partners in making choices. The Country/Rocker Into The Blues puts world-weary wisdom into an upbeat arrangement that's full of a cautious optimism and faith in tomorrow. The song is an "I'm alright" declaration with strong commercial punch. The Palace is a sonic painting of Redgate's time as a bartender, giving musical lift to at least one of the characters she encountered during that time.

Nothing Tragic speaks to Redgate's recovery from a serious injury that occurred at a point where she felt like she was getting her life together. It's a recognition that we all have our trials and that the cliché "whatever doesn't kill you makes you stronger" is true. Believe is about coming to a point where you're ready to put yourself out there again after having been hurt. It's potential mix-tape material for the broken-hearted and is couched in a great Country arrangement. Walkin' A Fine Line is another fine Country arrangement that finds Redgate further exploring the territory she enters in Believe; having graduated from a willingness to put herself out there to a committed interest. Cold November sounds like an allegory for putting your life back together after a loss; the song is honest without sounding bitter but also full of resolve. Written in strong-but-vulnerable language, Cold November is the sort of song I would expect to see licensed for a movie down the line. Redgate closes out with Roxy's, an ode to those who sell themselves, or at least an image of themselves to put food in their children's bellies and a roof over their heads. It's about the resolve to survive and give your kids a life even if no one ever gave you one.

Kate Redgate has walked a hard road and survived and has come back to a place where dreams are more than possible; they're in reach. Nothing Tragic lets go of the past and embraces a future full of hope and possibilities; told from the well of wisdom the hard road has won her. Musically the album is strong with great musicianship and a sense of melody that's pleasing to the ear, but it's as a story-teller that Redgate excels, wrapping listeners in her true-to-life tales and not letting go until the last notes fade from hearing. Make sure Nothing Tragic finds its way into your collection.

You can learn more about Kate Redgate at www.myspace.com/kateredgate or http://www.kateredgate.com/. You can purchase Nothing Tragic as either a CD or download at www.cdbaby.com/cd/kateredgate.
Posted by Wildy at 5:05 AM