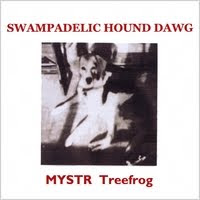 Very often I’ll try to give a very brief introduction to a band in the first paragraph of a review. There are occasionally albums I review from folks who really need no introduction, and then there are, from time to time, acts for which any introduction would be insufficient. Silver Spring, Maryland’s MYSTR Treefrog is one such artist. Born from the sweltering heart of Southern Blues with a punk attitude and some good, old fashioned Psychedelia thrown in, MYSTR Treefrog isn’t quite like anything that’s been heard in the popular music scene in a while. His album, Swampadelic Hound Dawg, is better heard than written about.

Swampadelic Hound Dawg opens with Walkerdawg, a delicious mix of Blues and Cajun styles that's guaranteed to get your musical libido swinging. The guitar work here is outstanding, and MYSTR Treefrog's voice sounds like part Leon Redbone and part Dan Akroyd. Jefferson Nova and Kelly Chevette is a "cautionary tale" about two young bandits from Maryland out on the road. It's an entertaining story-song but not one of the stronger tracks on the disc. How Gone Is Gone is a letter to a long-lost friend in song about letting go and freeing yourself from the ties that bind and about happiness. It's unusually personal and stands out from the rest of the album as a serious and introspective attempt at reaching out across innumerable miles to someone who may or may not be listening. God's Gift 2 Man is an old school intervention set to song around some of the filthiest blues licks this is of the Mississippi. It's an out-of-the-box story song that's entertaining and has a vaguely theatrical sensibility. Leonard is a strong blues/rock tune with great rhythm and some kicking collaboration between guitar and harmonica. Other highlights include Chasin' Tail, My Babes A Mechanic and Nawlins Worm Dance.

MYST Treefrog forges eclectic mix of Folk, Blues, Rock and some Cajun seasoning on Swampadelic Hound Dawg in creating a listening experience you won't soon forget. I can't say I loved every song on the disc, but as a complete work it's unforgettable. I have a sense that MYST Treefrog isn't a complete experience until you catch him live. Do so, if you have the opportunity.
Rating: 3.5 Stars (Out of 5)

You can learn about MYSTR Treefrog at http://www.myspace.com/mystrtreefrog%20or%20mystrtreefrogsblitherfestival.blogspot.com. You can purchase a copy of Swampadelic Hound Dawg at CDBaby.com.
Posted by Wildy at 6:15 AM