Review: PromiseLab - When The Lights Go Down 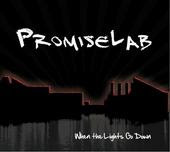 PromiseLab - When The Lights Go Down
2009, Tbn Audio

Baltimore, Maryland quartet PromiseLab was born as a duo in the basement of a row house and has metastasized into a soulful, rock band with a sound that demands to be heard. Singer/guitar player Shayne Hudson and drummer Larry Rohleder were the genesis of the band, with bassist Jon Adams and lead guitar Keff Klinetob filling out the roster. PromiseLab released their debut album, When The Lights Go Down on Rohleder's Tbn Audio label and are ready to take their brand of Rock N Roll to the world.

There's a mellow vibe that pervades When The Light Go Down. Opening with the title track, PromiseLab uses a blend of Rock, Funk and Soul to create a groove that makes you want to dance and sing along. Wrong Way finds PromiseLab seemingly trying to capture a middle ground between Hootie & The Blowfish and John Mellencamp; its quasi-Americana feel plays right into this blend sonically. Everything thus far sounds good, but I'm still waiting for a track to knock me out, blow me away or however else you care to think about. For all of the talent and decent sound that are part of When The Lights Go Down, that wow moment never comes. Songs like Stand By, New Dawn and Where To Now provide that easy-to-consume, easy-to-forget vibe that makes for great pop radio fodder but doesn't really make a lasting impression. Even on more upbeat songs like Burned Again the emotional Pop oomph just doesn't appear. The best moment on the disc comes with the last song, 1991, a country song that seems more authentic than the rest of the material presented on When The Lights Go Down.

PromiseLab is a talented bunch of musicians who are decent songwriters and would make for an enjoyable live show. On recorded media the cracks show a bit too clearly. While the songs offered by PromiseLab are pleasant and listenable, they didn't stick with me in any substantive way even after a dozen trips to the CD player. The album is good, but there isn't anything here that hasn't already been said or done better, and the end result is a pleasant bit of music without much bite.

You can learn more about PromiseLab at http://www.tbnaudio.com/ or www.myspace.com/promiselab. You can purchase a copy of When The Lights Go Down at the TBN Audio Store.
Posted by Wildy at 5:00 AM

Hey Wildy,
Thanks for taking the time to review the debut by PromiseLab. Keep doing what you do. It's great to meet people with a passion for undiscovered music. All the best,
Larry Rohleder
PromiseLab/ TbN AUDiO

I recently came across your blog and have been reading along. I thought I would leave my first comment. I dont know what to say except that I have enjoyed reading. Nice blog. I will keep visiting this blog very often.