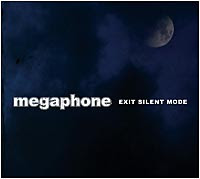 megaphone are the reigning princes of Orlando, Florida's Hard Rock scene, regularly outdrawing other local bands and even gaining opening spots for artists such as Ace Frehley, Paul Stanley, Everclear, Seven Mary Three and Edwin McCain. Their debut album, 2005's For Crying Out Loud had several tracks featured on MTV's Made and garnered radio play across Florida. While For Crying Out Loud was representative of the band, their latest album, Exit Silent Mode more accurately captures megaphone's live sound across 12 songs and a number of searing guitar solos.

Exit Silent Mode opens with Write It Down, sounding like a cross between 1980's Pop-Metal bands like Ratt and Poison mixed up with a bit of Modern Rock ala Three Doors Down. Big Hooks and a fat guitar sound over a driving beat make this a treat for the ears. Gravitate is manna for hard rock fans, kicking serious axe while holding tight to big Pop hooks that will send you spinning. This has become megaphone's biggest song live and is worth the price of admission. The Sin has a Jersey feel, reminiscent of Glen Burtnik's writing with Plinky. My Favorite Disaster finds megaphone reaching for the commercial lynchpin; this is Modern and Pop Rock radio fodder. It's not as dynamic as some of the heavier material, but proves megaphone can play on the big stage. What If is a big rock anthem with a chorus you won't be able to shake that challenges listeners to let go of petty concerns and grab on to what's real.

Whisper and Uncelebrated continue the migration to a more Pop sounding Hard Rock that enters the Bon Jovi of the late 1980's territory. We Were Young sticks with the mellow Hard Rock ethic before megaphone amps things up a bit with Making Sense, which may be the best tune on the CD. It's not a complicated tune, straightforward in composition with big hooks, good harmonies and a fast-driving rhythm that would play well to radio (Modern Rock and Pop). Exit Silent Mode closes out with The Last One, a dark and mildly ominous tune sketched in minor keys that reminds listeners that no matter how much time you think you might have the end could be right around the corner. The song challenges you to step up and "go for broke". It's an interesting composition, not really typical of the sound presented by megaphone thus far on Exit Silent Mode but not out of character with it either.

megaphone is an interesting band. Walking the line between 1980's glam and the current trend in Modern Rock isn't all that unusual, but megaphone has the panache of the former and the clean lines of the latter, which is the reverse of what many bands do today. The material on Exit Silent Mode is mixed with a lot of ups and downs, but megaphone has the personality and panache to carry the weaker songs. When everything is working, megaphone approaches greatness. How this plays out over time is anyone's guess, but suffice it to say you can't go wrong with megaphone or Exit Silent Mode.

You can learn more about megaphone at http://www.megaphonemusic.net/, where you can purchase a copy of Exit Silent Mode. You can download the album through iTunes.
Posted by Wildy at 6:20 AM