Review: Smokey Robinson - Time Flies When You're Having Fun 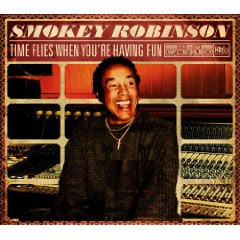 It's been fifty years since Smokey Robinson stepped into the limelight as one of the ubiquitous faces of Motown Records. Over time the acknowledgements have compounded, whether being honored on Hollywood's Walk Of Fame, receiving an honorary Doctorate from the Berklee College Of Music, a Rhythm & Soul Heritage Award from ASCAP or Kennedy Center Honors, Smokey Robinson has had an artistic and personal impact on music and on our culture. Robinson is known for numerous hits with The Miracles and on his own (Shop Around, Tracks Of My Tears, Tears Of A Clown, I Second That Emotion, Cruisin' and many others), but he's also written a slew of hits for artists such as The Temptations (My Girl, The Way You Do The Things You Do), Mary Wells (My Guy), The Marvelettes (Don't Mess With Bill) and Marvin Gaye (Ain't That Peculiar, I'll Be Doggone). Robinson doesn't sit on his laurels, however, returning on August 25, 2009 with an album full of 10 originals and 2 cover tunes: Time Flies When You're Having Fun. The voice shows a little wear from fifty years of crooning but is none the worse for it all. There's no one quite like Smokey Robinson.

Time Flies When You're Having Fun opens with the title track, a poetic monster but melodically a bit less than what I was expecting. Robinson has always had a distinctive talent for lyrics, and his voice is still unquestionable even with the toll of fifty years in the business, but something about this track just didn't click for me. Robinson's take on Norah Jones' Don't Know Why is true to the original but has more of a live feel. Robinson still records to this day with the entire band in one room, giving a more organic feel to the album and to this track in particular. Girlfriend finds Robinson digging into a more modern R&B/Dance feel, played organically. The result is a song with serious commercial value without compromising the timeless spirit that runs through the heart of Robinson's music.

Joss Stone steps in for a duet with Robinson on You're The One For Me. Stone tries to adapt a more lyric vocal style here to meld with Robinson's trademark sound but it just doesn't work out well for her. When singing with Robinson she sounds fine, but the heavy vibrato that creeps into Stone's softer sound makes a mess of the vocal line. This came as a surprise as I generally enjoy Stone's voice, but not here. One Time is an active R&B song that's as smooth as they come. I don't know if it will pull much weight on commercial radio with Robinson on vocals Robinson is a little outside their demographic, but put this song with a young up-and-comer and you've probably got a top ten hit. The biggest treat on the disc is Please Don't Take Your Love; hearing two legends such as Smokey Robinson and Carlos Santana trade lead lines is worth the price of admission on its own.

Whatcha Gonna Do is a soulful love jam with some serious jazz-inspired piano work. The vocal line gets to be a little repetitive late in the song, but overall it's a strong track. Satisfy You had a classic feel, along the lines of I Second That Emotion, but done in a modern R&B arrangement. The melody is archetypal for Robinson's songbook and may well join the ranks as one of his best songs. You're Just My Life features Robinson in a duet with the exquisite India.Arie. India.Arie holds her own alongside the Motown legend, providing listeners with a duet to remember. Robinson closes out Time Flies When You're Having Fun with an unnamed bonus track that turns out to be Robinson's take on The Jackson Five's One More Chance. Whether this was a late add-on in tribute to Jackson or planned ahead of time it's a classy rendition from a classy artist.

Time Flies When You're Having Fun is a wondrous mix of old and new; Smokey Robinson doesn't sacrifice himself or his sound but does manage to mix in a bit of the sounds of today with classic songwriting that would have been at home at any time in the Motown Era. The album has a couple of ups and downs but on the whole is a strong effort that should satisfy existing fans while opening the ears of a new generation to the wonder that is Smokey Robinson. Very well done.