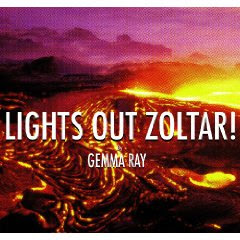 Gemma Ray is a sensation in her native England, writing dark and emotive songs in styles that range from Americana to 1950's and 1960's pop. If you find musical embodiment to Quentin Tarrantino's psyche it might just be a Gemma Ray album. Comparisons have included Lee Hazelwood, Nina Simone, Isobel Campbell and Norah Jones on Amy Winehouse's drugs, but it's clear that Gemma Ray has struck a chord so vital in UK fans that she's become something of a phenomenon. Ray's US debut, Lights Out Zoltar! drops on October 26, 2009, and has few peers stylistically. Fans of Canadian singer/songwriter Sarah Slean will be highly intrigued, and the comparisons to Tori Amos, Milla Jovovich and Bjork will be made, but Gemma Ray is no one if she's not herself.

Traditional instrumentation isn't an issue for Ray, who uses whatever sounds right to her irrespective of whether it's conventional. The opening track, 100 mph (in 2nd gear) is beaten out on a hollow body guitar with a kitchen knife while a toy piano tinkles in the background. Ethereal backing vocals and a gothic European cabaret pathos fills out the sonic landscape in support of Ray's entrancing vocal. Snuck A Peak sounds a bit like a Fiona Apple song played at the wrong speed on a phonograph. The surreal effects applied here make the song sound like it's in dimensional limbo with Ray's voice acting as the focus point. The song is beautiful in bleak fashion. 1952 takes an almost Surf sound and turns it into music noir with lyrics in both English and French. Death Roll is one of the more unusual tracks on the disc. Death Roll sounds like French Cabaret in a mad house; highly entertaining yet disturbing all at once.

No Water is an allegory for being caught in the emotional wastelands that we all find ourselves in from time to time. Considering the darkness of the subject matter, the chorus is bright and full of warm vocal harmonies. Ray eschews the gothic feel that pervades the album for gentle pop that runs entirely counter to the neurosis it envelopes. If You Want To Rock N Roll is bleak with depressive overtones and kind of gets stuck in itself, but Ray returns strong with Something Shifted, returning to the Americana style she started out with. The song represents a coming-to-terms with change even if it never really defines what's changed. Ray closes out with So Do I, a return to Carol King-style songwriting with a melody you could hear a group like the Chiffons Doo-Dooing along to.

Gemma Ray is unique and interesting as a songwriter, opting for an almost Madrigal Rock built on a wide range of traditional and toy instruments, all wrapped around the highly textured and beautiful voice she possesses. Lights Out Zoltar! is a dynamic Cabaret/Lounge trip you don't want to miss.
Rating: 3 Stars (Out of 5)

You can learn more about Gemma Ray at www.myspace.com/gemmaraymusic. Lights Out, Zoltar! will be released in the US on October 26, 2009. If you can’t wait, the UK release will drop on September 7, 2009. You can purchase a copy of UK release of Lights Out Zoltar! At BronzeRat.com. Digital copies will be available through BronzeRat on the date of release.
Posted by Wildy at 5:10 AM