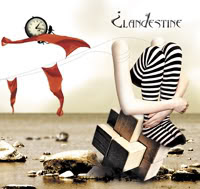 Clandestine has been making waves in Los Angeles’ underground music scene, mixing Progressive Metal with lush electronic sounds and the dynamic voice of June Park (vox, programming). The band is rounded out by Dan Durakovich (guitars, programming), Mark Valencia (bass) and Apex Theory alum Sammy J. Watson on drums. August 18, 2009 sees the release of Clandestine’s second album, The Invalid. Mixed by Sylvia Massey (Tool, The Apex Theory, System Of A Down), Clandestine is poised to make the jump to the big time.

Clandestine sets forth with Fearless, a vibrant and heavy modern rocker featuring the fabulous vocals of June Park and the intriguing guitar work of Dan Durakovich Fearless is ready for Modern Rock radio and may have some crossover potential particularly if it were placed on the soundtrack of a psych thriller or horror film. Disappear finds Clandestine venturing into some seriously progressive territory, showing the sort of creative construction and funky time signature work that made bands like Rush. Drummer Sammy J. Watson sounds like he might have spent some time studying Neil Peart, if nothing else. Silent Sin heads more for a middle-of-the-road pop sound likely designed to increase Clandestine's marketability across demographics, walking a similar path to Evanescence (although I have to admit that I think I might choose Park over Amy Lee).

Clandestine bounces back a bit hardcore on Philistine, ripping up vocals chord, tearing off the roof; generally melting face. Philistine questions existence, purpose and generally the meaning of life in urgent overtones with some of the hottest guitar work of 2009. Fracture has an urgent feel, threatening to fly off the rails at several turns winding around a melodic core like the winds of a musical hurricane. Dead To The World is an exquisite piece of Prog-Metal; Park is in perfect voice, and the arrangement soars over funky signature changes, arrhythmic progressions and a searing mix of guitar and synth to create a sound that's at times, other-worldly. The Invalid is a song about the right to die from the perspective of someone who has no control over their life. The song is angry and violent in tenor and thought provoking in content. It's a bit more cerebral than your typical Prog-Metal piece without sacrificing a bit of quality in the music. Be sure also to check out Comatose.

On The Invalid, Clandestine takes the unique sound of Evanescence and crosses it with the inventive progressive rock/metal styles of Rush to create one of the more unusual and welcome releases of 2009. June Park offers up a powerful voice that can croon a lyric line or scream like a banshee, whatever the moment calls for. Clandestine is incredibly talented musically, and the writing's not so bad either. There's too much power and too much talent here for Clandestine to stay hidden from public view. Clandestine just might be one of the next heavy hitters in the world of Rock.

You can learn more about Clandestine at www.myspace.com/clandestineband. The Invalid hits the streets on August 18, 2009. Expect wide availability. Keep checking the band’s site for more information.
Posted by Wildy at 5:20 AM