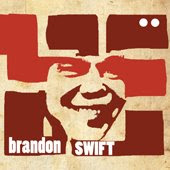 Brandon Swift hit the reset button after a freak accident led to a re-evaluation of priorities. Deciding to embrace the concept of Carpe Diem, Swift focuses on the positive experience of life. This energy and optimism shines through on Brandon Swift, his debut CD. Swift is touring the United States in a converted van with living quarters and a solar panel to play for anyone who will listen and live each day as the gift it is.

Brandon Swift appears to have thoroughly absorbed the mid-1990's North Carolina scene that included artists such as Hootie & The Blowfish and Edwin McCain and added in a bit of Black Crowes southern blues flavoring. Shine sums up these influences in one wonderfully eclectic and instantly commercial tune that should be licensed from here to Nashville and back. Lonely touches on a sort of unrequited love in sharply melodic terms and serves as an appropriate lead-into Surrounded. Surrounded is one of those pop tunes that are instantly recognizable the first time you hear it. Swift shows the same sort of Pop/Rock songwriting flair as Rob Thomas on a song that's as well-written lyrically as it is musically.

Stay With You is a classic Rock N Roll love song, perfect for mix tapes, marriage proposals or dedications to that special someone. Swift accomplishes all of this without sounding like a walking cliché, which is an accomplishment in itself. This is a great tune. Walkin' is another winner, taking on a Blues/Americana/Country mix that's irresistible. You'll want to dance and sing along. Satellite has a great melody that will stick with you and leads into another classic Rock love song, Wandered All Around. Swift has a knack for quirky love songs that don't fit perfectly in the mold without sounding of the mold. Swift closes out with Start With Yourself, a song pull of positive thinking and a killer melody. The message, "If you want to change the world then start with yourself" follows one of the great paradigms of Gandhi's teachings (Be the change you wish to see in the world). It's a great tune; once again mixing truth and a positive attitude without falling into cliche.

Brandon Swift has the voice of a Rock N Roll front man, sounding just a tad like a cross between Edwin McCain and a young Jon Bon Jovi. His songwriting is outstanding; intelligent, tuneful and with a singular voice as a composer that will speak to people. Brandon Swift is a spectacular introduction to the man as an artist and he artist as a man. A positive future icon in the world of Rock N Roll has emerged.