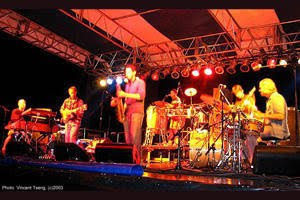 Boulder, Colorado's The Motet released Dig Deep in July of 2009; The album is a unique experience, reflecting the work of more twelve current and former members of or contributors to the band from over its rich history. The eleven tracks presented on Dig Deep give an overview of the band not as an ensemble but almost as a vibrant family of musicians, continually growing and refreshing itself over time.

Dig Deep gets off to a flying start with Kalakuta Show, a funky bit of Space Age Jazz/Electronica that will get your toes tapping and your feet moving. Roforofo Fight is a busy Electronica/Dance tune that draws on funk rhythms and jazz instrumentation to expand the sound around an incessant rhythm more fitting to a dance club than casual listening. Dig Deep draws in Latin Rhythms to liven up the Electronic instrumentation underneath a forgettable synth progression. It's a tune likely to do well on the club scene but is little more than fluff. Mighty goes back to the Funk/Jazz mix that seems to work so well for The Motet. The instruments here all sound organic (with the exception of a 1970's sounding Synth that pops up from time to time). The bass work in particular is notable here.

Push goes for a more mainstream Funk/R&B sound, with The Motet creating a tune that might have been a huge chart hit if it were put out ten years ago. Expensive Sh!t plays like a grandiose display of the power of greed, from the inner turmoil to the glitzy presentation. The song is ultimately listenable, creative a showpiece atmosphere that's inescapable. The Motet slows things down a bit with South African rhythms on The Luxury Of Doubt. New Old opens with a xylophone monologue that sounds like a take on a Steve Howe guitar line (Changes) before settling into a comfortable and repetitive song structure whose best minutes are at the beginning. Dig Deep concludes with Tonight It Belong To You, opening with a sample from Barack Obama's victory speech on Election Day 2008. Steeped in Funk and ethereal synth overlays, the song squanders what is implied as an inspired moment with a mundane bit of dance music that's more programmed progression and beats than inspired creativity.

It's interesting that a band named The Motet would be so instrumentally talented, or perhaps that's the band's private joke. There is a distinct level of musical talent in the band, and when they're on track they're amazing. The Motet occasionally loses their focus on Dig Deep, withdrawing into cliché or outright formulaic song construction. Luckily these instances are the exceptions rather than the rule. Dig Deep doesn't stand still, mixing styles and influences with a reckless abandon that generally works and creates an atmosphere that makes the listener want to dance along. Dig Deep is a worthy offering. I'll be curious to see where The Motet goes next.

You can learn more about The Motet at www.myspace.com/themotetmusic, where you can download Dig Deep for free!
Posted by Wildy at 5:00 AM

Is the writer aware of the music of Fela Kuti? I ask because 4 of the 11 tracks on this album are Fela covers.

Though the members of The Motet are talented musicians, they don't really hold a candle to Fela and his then-drummer Tony Allen, considering Allen and Kuti laid down all of their tracks without the benefit foa synthesizer or a drum machine. Many of the tracks on this album sound like disco, which Fela most definitely NOT about.