Review: The Postmarks - Memoirs At The End Of The World 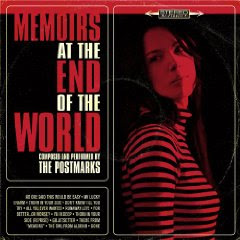 The Postmarks - Memoirs At The End Of The World
2009, Unfiltered

The Postmarks are the band with a female lead singer with a boy’s name. Tim Yehezkely, born in Tel Aviv, has one of the more intriguing voices in popular music. Gorgeous in tone and detached in affect, Yehezkely stops listeners short as interest grows through awe to utter enthrallment. The Postmarks, rounded out by Jonathan Wilkins and Christopher Moll, delve into deeper, darker currents on their sophomore release, Memoirs At The End Of The World. This was a conscious choice by the band with a reputation for Cinematic Pop/Rock with a rough-hewn flavor, aiming for more realistic reflection of the world around them in their sound.

Memoirs At The End Of The World opens with a Moody Blues moment; the rock symphonic opening of No One Said This Would Be Easy is highly reminiscent of Justin Hayward & crew and the overall feel carries through the song. The satiny yet quirky vocals of Yehezkely fit perfectly in this dynamic. Thorn In Your Side is hauntingly understated and full of a fragile beauty. The vocal harmonies here are dressed in delicious minor keys, giving the song a mixture of bleak acceptance and hope that dance around each other like uncertain partners. The Postmarks get into a more New Wave/Electronica sound on Don't Know Till You Try, working in horns and spacey synth. The song is upbeat and catchy but still has a dark tenor to it that makes for a vague discomfort in the listener.

All You Ever Wanted brings an eastern influence to the album, with vaguely Japanese sounding instrumentation and a plaintive folk/Electronica bed accented by horns and faux strings. The song is catchy yet smooth; a mild Pop radio threat. Run Away Love continues with the minor key beauty in a slightly off-kilter waltz that's part proposal and part confrontation. There is more tension beneath this one-minute interlude than meets the eye, as implied in the rough industrial dulcimer styling of For Better... Or Worse? There's a dark rebellious heart to this song that comes with holding on to forbidden love, but the undertones suggest the narrator knows that perhaps not all is as wonderful as she might wish to believe. Musically this is a challenging tune, mixing the orchestral elements of a Moody Blues with a darker, urgent nature. Yehezkely's vocals are great, as they have been throughout the album, but there is a desperation implied in the music that just doesn't come through in her theatrically blunted affect.

I'm In Deep is a love song at first blush, full of the dreamy attitudes of one enraptured with another, but given the two previous songs its hard not to hear an ulterior meaning to the song (with I'm In Deep having a negative rather than a positive connotation). In fact, I'm In Deep is one of the most positive songs on Memoirs At The End Of The World, a true bit of mix-tape magic in the ethereal pop tradition of Mazzy Starr. Theme From "Memoirs" has a dark, "film noir" feel about it, like a Mike Hammer-like character might come ambling into view at any moment. The theme itself isn't as dark as some of the more introspective tracks on Memoirs At The End Of The World, but carries with it a weary sense of a world gone wrong. The Postmarks closes out the album with Gone, a slow and melancholic admonition to let go of what's already moved on. The elements of beauty are still here, but there's a suggestion of madness in the aural dissonance that grows as the song wanes.
The Postmarks have a gothic, post-chamber Pop feel about them, creating as much aural and cognitive dissonance as anyone this side of Robert Smith himself. There is a fluid beauty to the Postmarks at their most genteel, and the band is never out of control, but you can sense reality slip away throughout the course of Memoirs At The End Of The World. The listener is left with a distinct ambivalence; loving the album for what it is sonically and yet becoming more and more disturbed by its tenor as time goes on. The mix, and the success of the mix, suggests nothing short of brilliance in the writing and construction. Vocalist Tim Yehezkely has a gorgeous voice, although it would be good to hear a bit more dynamic variation in the vocal line. On the whole, however, there really isn't much to complain about. This is one of those albums that even if you don't like it you have to respect it.

You can learn more about The Postmarks at http://www.thepostmarks.com/ or www.myspace.com/thepostmarks. You can purchase a copy of Memoirs At The End Of The World at Amazon.com. You can download a standard edition or deluxe edition through iTunes.
Posted by Wildy at 5:10 AM