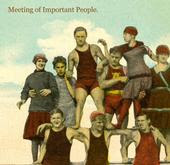 Pittsburgh's Meeting Of Important People attack a melody line with the eclectic Pop veracity of bands like Weezer or Better Than Ezra. The electric/acoustic Power-Pop trio has a knack for comfortable pop arrangements, clever turns of phrase and choruses you could launch ad campaigns on. Their debut album, Meeting Of Important People was released in July, 2008, and suggests great things to come.

Meeting Of Important People opens Brittany Lane Don't Care, a catchy tune with hooks perfect for College or Pop Radio. The chorus is likely to become lodged in your brain; you've been warned. Hanky Church is built around verses with a metronomic sing-song quality. This is one of those songs that will recur to you over time even if you haven't heard it in a while. Perhaps it's the Beatles-inspired chorus or a melody that's almost universal, but either way it's two in a row you're stuck with once you've heard them. One O'Clock is a song about biding your time; whether you're a student waiting for the year to end or working your way through the week waiting for the weekend to start there is something here to identify with. Dead Man is a bouncy bit of fluff that's a lot of fun to listen/dance to. The tuneful melody blows up into a frenetic acoustic-punk chorus you won't soon forget. Down In The Hollow is a gentle acoustic tune with a great melody and a quirky, eccentric feel. There's an almost dream-like quality to the tune that makes for a great listen. The album closes out with four demo recordings: Brittany Lane Don't Care and One O'Clock, classified as Laptop Demos. Rest-Stop and Stop Seeming Like A Good Idea aren't on the album proper, and Rest-Stop may be the best tune presented here. These treats may be little teasers for what is to come.