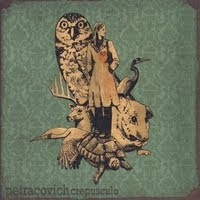 Petracovich is a San Francisco band that is both the figurative and literal projection of Jessica Peters Malmberg's muse, which can run the gamut from ethereal yet trippy quasi-dance tunes to Americana/folk story songs. Peters is an eclectic and engaging performer who writes without filters; the full range of thoughts and emotions are on display whenever Peters stands in front of a microphone. Petracovich's third CD, Crepuscolo, finds the band continuing to evolve toward a Pop/Folk sound that began to show on Petracovich's 2nd album, We Are Wyoming.

Crepuscolo opens with Heaven Help The Day, a sweet sounding Folk/Pop tune with serious issues buried deep in the song. The narrator doesn't know her father and wanders the world always wondering if her Dad is out there somewhere. Emotional revenge is the order of the day in a fuzzy piano tune that is reminiscent of Ben Folds. Peters delivers a soft and sweet vocal performance on Mockingbird that is full of a texture and grace not often found in the popular realm. Sleep It Off/Lie Down finds Petracovich sounding like a cross between The Be Good Tanyas and Lisa Loeb; the song is well-written and pleasant side-trip along the way. Syracuse Next Six Exits is all about finding peace wherever you might be, even the longest short stretch of the New York State Thruway there is. The melody and arrangement on this song are exquisite.

Big Heart is a plaintive song of devotion built on a lanky arrangement that's just starting to get comfortable in its own skin. The dynamics make the song here, turning a lush green into a verdant field on which Peters can play. Dark Woods is a highly charged but brief instrumental that is built not so much as a whole but a conglomeration of musical pieces that is jarring and lovely at the same time. You Are This Perfect is an enthralling composition written to Peters' then-unborn baby. The song is a bittersweet tribute now as that child survived only eight days, but the love of a mother for her unborn child has never been transferred into song more perfectly. This is one of those Wow moments that happens from time to time in music and makes the album worth checking out all on its own. Make sure you also spend some time with Miramar, Last Day Of February and the live recording of We Must Have Been Birds.

Petracovich exudes a sense of reality and honesty that is daring, even surprising. Spinning golden threads of melody and quirky yet contemplative lyrics into an alchemists' dream of what Pop music should be; Petracovich delights song after song. Crepuscolo is one of those albums that doesn't bowl you over, yet you don't want to take it out of your CD player or playlist for days or weeks on end. Jessica Peters Malmberg is enthralling as a vocalist and storyteller. This disc is a must-have.

You can learn more about Petracovich at www.myspace.com/petracovich or http://www.petracovich.com/, where you can order a copy of Crepuscolo as either a CD or MP3. You can also order the album though CDBaby.com.
Posted by Wildy at 5:10 AM