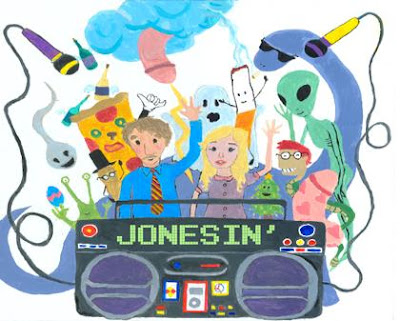 Matt and Jenny Jones are getting married! In September of 2010, the couple will tie the knot officially, although they’ve already wed their musical fortunes to great effect. Mixing a Devo-esque Geek Pop with Japanese Pop (J-Pop) with drum programming, Casio keyboards and perhaps some medicinal assistance, Jonesin’ has crafted a unique sound that will get under your skin. Jonesin' set out to record material under the guidance of The Motels' Matha Davis at her personal studio. The result, their debut album, Hi, We’re Jonesin’! will have you either falling in love with Jonesin’ or taking a machete to your CD/MP3 player. There’s little middle ground.

Hi, We're Jonesin! opens with Rollerskates, an intriguing love song that's part geek, part Pleasantville-weird Utopia and part cheesy 1970's television musical. Highly keyboard driven, the song features both vocalists, with Jenny Jones sounding a bit like a moll from a mob movie and Matt Jones sounding a bit like Gordon Lightfoot. Bummer Summer continues in a similar vein, with the sort of keyboard arrangement you might have heard programmed into a Casio keyboard in the late 1980's. Bummer Summer actually was quite apropos for a year when temperatures in much of the Western Hemisphere never quite got into a summer pattern. Jonesin' gets into an ethereal/psychedelic mindset for Too Stoned To Screw. The song is anathema to the punk classic Too Drunk To F#ck, sticking to a highly mellow vocal line and a Brookstone nature CD keyboard part. For the song Ice Cream I have to present you a mental picture. Imagine if Grease was filmed in a junior high instead of high school with the cast of Revenge Of The Nerds. Ice Cream would be the sort of song that would come out of such a movie. It's a beauty that borrows liberally from Sippin' Cider Through A Straw but is none the worse for wear.

2012 takes off on the most recent popular urban myth that the world will end in 2012. It's a child-like, optimistic take on the survivalist mentality done with a bit of panache and a shift of wit. The song is wonderfully melodic and catchy. Hey, Aliens? is a fanciful attempt at communication with life from outer space, presented with the humor and naiveté of youth, reminiscent of the folks who chose to stand on top of a Los Angeles skyscraper and greet the invaders in Independence Day. What If? asks existential questions about how you might change your life if you had the opportunity, although it goes into those questions with pre-conceptions about aliens and alternate universes that may not be the societal norm. It's a catchy tune that will get stuck in your head. Jonesin' closes out with How Much You Wanna Bet?, an Americana gem about commitment and giving yourself over to a cause (such as marriage). Once again, the naïveté of the two vocalists, or characters, is striking.

The more I listen to Hi, We're Jonesin'! the more I get the impression that it's more like a Rock Musical or concept album than just a collection of songs. The two vocalists have distinct personae that stay solid throughout the album, with relational ideas that show up across songs. The characters here are naive and idealistic and somehow very real. When I first listen to Hi, We're Jonesin'! I didn't like it (which means I didn't get it right away), but this is a brilliant album. The nerdy keyboard arrangements set the tone, with Jenny Jones’ wide-eyed ingénue and Matt Jones’ guileless bravado creating a Utopian setting for either a perfect life or a disaster. Jonesin' does us all a brilliant turn on Hi, We're Jonesin'! I highly recommend you check it out.

You can learn more about Jonesin’ at www.myspace.com/jajonesin. Hi, We’re Jonesin’ drops on September 8, 2009. Keep checking their MySpace page for availability.
Posted by Wildy at 5:20 AM