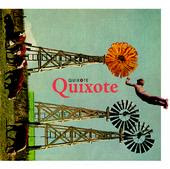 Quixote opens with Annunaki, a vibrant mix of New Wave and Post-Punk sensibilities. The mix here recalls the Garage era, more focused on capturing the sound as it occurred than over-producing the sound. Hubris finds The Clash meeting Eastern European folk music in a delicious tune you’ll have on repeat. Wide Awake Half Alive will get you looking around for the nearest pit; it’s a great rock tune with hooks and punk energy. To The Bottom And Back Again seems to get a bit lost in the middle. The musical interludes are bland and uninspired and sound more like they were designed to take up space than anything else. Owls is a great listen, although perhaps a bit monochromatic. Quixote closes things out with Don’t Hurt, a highly emotive shoegaze rocker with a dynamic vocal line.

Quixote takes listeners on an emotionally charged if somewhat musically obscure road trip on their self-titled debut. The sound is practically live, maintaining the original rough nature of the sound instead of relying on over-production. It’s not a bad record, but not enough unlike a bunch of other acts to really make it stand out. Quixote is good; I just don’t sense the extra something on this disc that will propel them to the next level.

You can learn more about Quixote at www.myspace.com/wearequixote or http://www.wearequixote.net/. You can download Quixote through iTunes.
Posted by Wildy at 5:00 AM