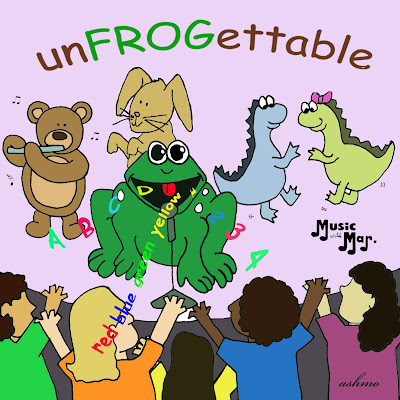 Maryann “Mar.” Harmon is the creator of Music With Mar.; a nationally known music education program for children. Harmon has produced music for over twenty-five recordings, winning two Children’s Web Awards and one Silver Parents’ Choice Award. Harmon holds a Bachelors in Music and a Masters in Education (Early Childhood Education), and manages to balance education and musical enjoyment for her fans/students. Harmon’s latest CD, UnFROGettable, continues her efforts to educate and entertain toddlers and their parents with the help of her old friend, Mr. Froggy.

UnFROGettable opens with the title track, a song about Mar Harmon's ever-present sidekick Mr. Froggy. The song is a teaching tool, sort of an extended mnemonic device for learning the alphabet, numbers and colors. Dinosaur Dance teaches movement to little ones with Mar Harmon calling the dance. This is a fun one for the kiddos and secretly fun for the parents as well. Chugga Chugga is another movement song that is bound to get your toddlers involved and will work very well in Music With Mar's class environments. Over In A Place uses a rock guitar driven song to learn about animals and where in the US they come from. Harmon takes an urban turn on Bunny Hop Jump, rapping through a movement tune.

I Do Like To Sing is the sort of song that causes parents to bang their heads against walls repeatedly until it's over. Harmon repeats the same phrases over and over to a recognizable melody until it's either you or the CD. Join In The Game is another movement song, this time delivered in Reggae style. A Child In A Circle is an interactive game set to music to help toddlers learn to identify with another. Keep in mind there's nothing overtly original going on here; it's a classic mix of play and educational music for toddlers but works well for the kiddos. Harmon takes on a version of This Is The Way on the way to I Can Count And Sing, which is fairly self-explanatory (and sung to the tune of B-I-N-G-O). Looby Loo is another one of those children's song most everyone is familiar with and it's offered here with a Cajun flavor. Name Song Games is self-explanatory, and I've Been Working on The Railroad is done in a quasi-electronic arrangement that's more Casio than Techno. My Teddy Bear is a great bonding song for the kiddos and leads into I Love You All The Time, a song with sweet sentiment that offers the same ideas as several dozen children's board books you can buy.

UnFROGettable is decent, although after hearing a number of Mar Harmon's CDs, it is quite possible that some of the spark that drove her early recordings has mellowed with time. The material offered here will likely play well with young ones, and Harmon occasionally captures the spirit of her earlier recordings, but there's also a certain blandness that sets in that just isn't quite overwhelmed by the diversity in musical styles. UnFROGettable is a good listen for the kiddies, but not Harmon's best.

You can learn more about Mar Harmon at http://www.musicwithmar.com/. You can purchase UnFROGettable in her online store.
Posted by Wildy at 5:00 AM