Review: Roberta Gambarini - So In Love 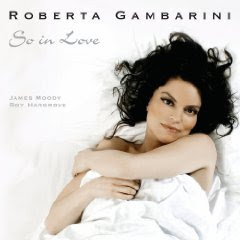 Roberta Gambarini built her reputation the old-fashioned way. A true road-warrior, she’s toured/performed with the likes of Ron Carter, Herbie Hancock, Slide Hampton, Roy Hargrove, Jimmy Heath and Toots Thielman, just to name a few. The native of Italy, who now calls the United States home, has one GRAMMY nomination under her belt, and has been dubbed by the great pianist Hank Jones as the “best singer to emerge in over 60 years”. (Jones has accompanied Ella Fitzgerald, Billy Holliday, Sarah Vaughan, Carmen McRae, Bing Crosby, Nat “King” Cole, Billy Eckstine and Frank Sinatra, just to name a few. On August 25, 2009, Decca Records releases Gambarini’s third album, So In Love, featuring guest appearances by James Moody, Roy Hargrove, Eric Gunnison, Chuck Berghorfer and George Mraz, to name a few. The album was recorded by Al Schmitt at Capitol Studios.

Gambarini is a vocalist with shades of Keely Smith's sharp alto and Ella Fitzgerald's warm tone in her voice. She opens So In Love with the title track in a fashion so sultry she could melt the microphone. Day In And Day Out finds Gambarini's smooth sound wending its way through a difficult melody line without every breaking a sweat. Get Out Of Town is the sort of performance you don't hear much of in vocal jazz anymore. Gambarini has this slight edge to her voice, but wraps it up in silk and taffeta while mesmerizing the listener into satisfied state. The arrangement here is ingenious, with the music growing almost out of thin air but never upstanding Gambarini while wrapping around her voice like a shawl. Gambarini gives a lyric and inspired performance of Patsy Cline's Crazy. There have been so many covers of this tune over time it's almost a cliché, and it’s rare to find an artist who truly does the song justice, but Gambarini makes the grade. Gambarini's take on That Old Black Magic is good but lacks the conviction that would make the song truly fly.

Switching to the popular realm, Gambarini takes on the Beatles with Golden Slumbers/Here There & Everywhere. He vocal take is gorgeous but the arrangement leaves something to be desired as it saps Here There & Everywhere of its vitality. From This Moment On finds Gambarini trying to keep pace with the great Ella Fitzgerald. This is one of those tunes you just don't do if you can't nail it and make it your own. Gambarini's version is good but just can't stand up to the original. Gambarini goes the stock standard route with You Must Believe In Spring and This Is Always before ripping off the roof with You Ain't Nothin' But A J.A.M.F. Scat fans take notice, Gambarini's got the pipes. Her performance here is absolutely inspired.
So In Love has some ups and downs, but there is no doubt that Roberta Gambarini should be considered one of the bright stars in vocal jazz. So In Love is a strong introduction and also a great learning tool, as it displays very clearly where Gambarini's strengths are and are not. If you're a fan of vocal jazz, and particularly the great Ladies of the 1930's and 1940's, then you'll definitely want to spend some time with So In Love.
Rating: 3.5 Stars (Out of 5)

You can learn more about Roberta Gambarini at http://www.robertagambarini.com/ or www.myspace.com/robertagambarini. So In Love drops August 25, 2009. You can pre-order the album through Amazon.com. Expect digital distribution through all major outlets, including Amazon.MP3 and iTunes.
Posted by Wildy at 6:23 AM