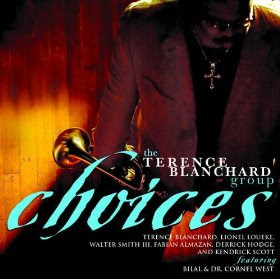 Terrence Blanchard is prodigious. The Grammy Award winning musician/composter/arranger/bandleader has more than twenty-five albums to his credit, either on his own or with others. He’s also composed music for over 40 movies, including Malcolm X, Clockers, Mo’ Better Blues, Backbeat and Eve’s Bayou. Blanchard’s latest, with The Terrence Blanchard Group, Choices, dropped on August 18, 2009.

Choices opens with Byus, a Funk/Jazz hybrid with Latin elements that starts out with a monologue from Blanchard on intellectualism vs. intelligence. Sax and Trumpet are the primary voices here, creating interesting tension in the shared melody lines while the sax gets in some prodigious runs on its own. The trumpet is a bit more reserved, sticking to more placid, traditional waters. Blanchard gives a short statement on Beethoven and representative power of music as it compares to words before launching into the down-tempo D's Choice. A slow, almost ethereal back drop is punctuated by a slow, staccato melody line that slowly grows more lyric throughout the song. Bilal steps in for a guest vocal appearance on Journey, providing a moving performance in tandem with Blanchard's ever-present trumpet. Hacia del Aire opens on a mournful note, with the Trumpet sounding the clarion call of sadness. The ever-resilient piano changes the mood of the piece however, with trumpet coming along on a more hopeful promenade. All of this is done in a down-tempo arrangement where the rhythms are unsettled and variable. The song grows into a larger conversation as the saxophone cuts in. Soon three voices are talking at once, nearly over one another. The result is a cacophony that can overpower the listener at times.

Him Or Me finds Blanchard stepping back in time for a piece that could have come of the early 1970's; Progressive and classical jazz elements mix over seven minutes to create a dynamic musical trip topped off by one of the hottest jazz guitar solos of the year. HUGS (Historically Underrepresented Groups) starts off with an eclectic and variably rhythmic piano intro before evolving into a musically explosive quintet (piano, trumpet, sax, bass and drums). There is a sense of impending chaos that looms, but the song never quite loses its bearing and flies continually in that grey region that is the line between genius and disaster. Blanchard is inspired here, outplaying his own sensibilities and reaching that hypothetical "beyond" state that musicians find in their best moments. Winding Roads is a twelve minute journey that lives up to it's name, taking the listener across musical countryside and blind corners where the scenery changes as quickly as the rhythms of the song. This is another wow moment, but it takes awhile to unfold. Bilal returns on When Will You Call, a classic sounding song that is given emotional weight by Bilal's blue vocal line. The instruments draw back and give Bilal room to work, adding in the appropriate support and fills without becoming too involved.

A New World (Created Inside The Walls Of Imagination) finds Blanchard waxing about the "Age Of Obama", the changes it portends. The song is well structured yet does reflect the tension between change, retrenchment and history that Blanchard references in his opening word. Blanchard's trumpet work is outstanding as always, but it was the guitar work that really caught my ear on this one; drawing on an early electric guitar sound (Les Paul, Chet Atkins) to censure tension while creating more of its own. Blanchard closes out Choices with Robin's Choice, opening with an air of Gershwin before exploding into a modern mix of music and noise. All action ceases suddenly at the end and Blanchard explains why we're here. I'll leave it to you to find out on your own.

Choices moves from quiet creation to cacophony of sound and hits all points in between. Fans of classic, Progressive and modern Jazz will all find something to like here, as Blanchard hits on moods from Monk to Miles and even shades in a little Gershwin here and there. Choices is not the best choice for casual listening; the music demands your attention and refuses to take a back seat. Don't be surprised if The Terrence Blanchard Group gets mentioned come award season.