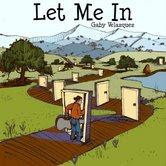 Gaby V hears a different drummer than most of us and has been following that inner beat for much of his life. A gold medalist in baseball in the 1996 Junior Olympics, Gaby V's baseball dreams were ended prematurely by injury. By 2005, Gaby V was locked into the corporate world as a loan originator, but his worldview was changed at a music festival in Northern California. Two weeks later Gaby V walked out of his structured world, got on a plane to Central America and spent six months traveling around with his guitar. Upon returning to the US, Gaby V moved to San Francisco and immersed himself in that city's music scene, making a lot of high-profile friends over time. Cut to 2009, and Gaby V has released his debut album, Let Me In, produced by Grammy winner Oz Fritz (Tom Waits, Les Claypool, Trey Anastasio). Gaby V mixes quirky titles with highly melodic arrangements and first class musicianship in an effort sure to garner him attention outside of Northern California.

Let Me In opens with Intuition, a tuneful composition that finds Gaby V sounding more than a bit like Paul Simon. Leslie is all about trying to find your way in the world, and how sometimes the right person can open all sorts of doors inside of you you might never have known were there. The melody is infectious and has a bit of a Jason Mraz-style lyrical flood going on; a highly memorable track with real potential commercial impact. Let Me In is a musical ultimatum with a bit of country flavoring. By this point in the album you'll notice that Gaby V is pretty smart and concise lyricist with real sense for melody and perfect little hooks that stick in your brain long after the song ends. Gaby V also has a quirky relationship with words at times, creating little moments of cognitive dissonance in his songs that grab the listener's attention. This happens for the first time in Time and serves as both a subtle comic foil and a focus for the listener.

Dreams has a reggae flavor and speaks to a life lived for the love of what you're doing rather than one lived in fear of losing what you have. It's a highly positive message and a highly infectious melody/arrangement. Gaby V speaks from experience here, lending the tune veracity and power that's often missing from feel good Pop. Seamstress is full of funk and celebrates someone else who lives according to the beat of their own drummer. It's an exciting and infectious tune that will get you moving if you have even the barest pulse. Sloshbucket is funky bit of 1970's rock about coping with day-to-day life. It's yet another tune on Let Me In that will get you moving unless you’re clinically dead.

Drive-Thrus and Ammunition is a classic-country sounding tune that turns into a Ramones-style Punk anthem about the American tendency to strive for progress no matter how many steps back it might take us. There's a whiff of humor running through the song even thought its clear Gaby V doesn't find the subject funny. Exit is a bit of gentle introspection where Gaby V seems to take in all he's lived through thus far and sets a point on the horizon as his next stop. It's not clear where, exactly, he's headed, but the closing track, Mustard Squirt might offer some clues. Mustard Squirt is a bit of whimsy that fits perfectly into the American Folk Music tradition.

To judge from the material presented on Let Me In, Gaby V has the intelligence, musical talent and panache to play with the great storytellers and troubadours of American Folk. Gaby V uses humor and insight to open the eyes of listeners, throwing curves in off counts to keep listeners on their toes and occasionally blowing you away with the high heat of a blunt observation. The musicianship and songwriting here are sublime. Gaby V might just be the biggest (and most pleasant) surprise of 2009 thus far. Let Me In is essential listening, a Wildy's World Certified Desert Island Disc. Make sure you check this one out.
Rating: 5 Stars (Out of 5)

You can learn more about Gaby V at http://www.gabyvmusic.com/ or www.myspace.com/gabyvmusic. Let Me In will be released in the Fall of 2009, although you can download a copy now through Amazon.com! If you’re looking for more traditional release forms (CD, LP), then keep checking Gaby V’s website for a release date.
Posted by Wildy at 5:20 AM