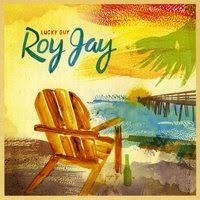 Roy Jay put off music for twenty years while life ensued. A successful entrepreneur, Jay came home from a concert one night, sat down at his computer and ordered a guitar. Tired of his workaholic lifestyle, Jay channeled those tendencies into his music; playing six days per week and enrolling in Berklee School of Music's online program. Jay initially set out to record songs he could gig with, but found kismet with producer Chris Seefriend (Quincy Jones, Rosanne Cash), who seems to have brought out something more in Roy Jay. The result is Jay's debut CD, Lucky Guy, which features influences as distinct as Bob Dylan, Paul Simon, Jimmy Buffet and the Grateful Dead.

Lucky Guy is an interesting and at times trying album as it appears Jay hasn't figured out who he is or wants to be musically. Lucky Guy opens with the title track, sounding a bit like a cross between Ricky Nelson and Jimmy Buffet. The low-key vocal line provides a laidback feel to the disc. Subway Ride clocks in at nearly 7:30 minutes and mixes elements of traditional Classic Rock and Psychedelia. In And Out Of Dreams is an esoteric and intelligent love that's perhaps a bit too much of each to connect with a majority of listeners. Mungo Jerry finds Guy revisiting his Buffet theme; it's a bit too derivate to sound like anything other than a tribute. Prettiest Girl In Wal-Mart is a fun tune that explores unrequited love in Sam's place and the unexpected consequences. This is an upbeat and fun track with a definite novelty tune air. Other highlights include California Grey, Time's Page and Wrinkle Your Dress.

Roy Guy just didn't pan out the way I'd hope from his promotional materials. Guy is a decent songwriter but perhaps just doesn't sell the material well. His vocal approach is laid back and unenthused and doesn't help to bring the listener in the way it might. Lucky Guy is a pleasant listen but doesn't leave the listener with any real compulsion to keep coming back.
Rating: 2.5 Stars (Out of 5)

You can learn more about Roy Jay at http://www.royjaymusic.com/ or www.myspace.com/royjaymusic. You can purchase a copy of Lucky Guy at www.cdbaby.com/cd/royjay.
Posted by Wildy at 6:17 AM