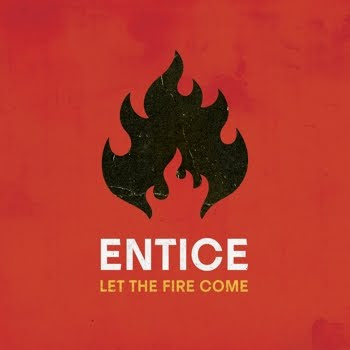 Entice is three parts Orange County glam with a heaping helping of Rust Belt sensibility thrown in. Isaac Leland (vox/piano/guitar); Kevin Brunhofer (bass/backing vox) and Kevin Doyle (drums/backing vox/electronics) are all Southern California born and bred, while lead guitarist Tony Chopp made the trek all the way from Michigan, finding a musical home in Entice not long after landing in SoCal. It's a match made in Heaven for the quartet, whose smooth, heavy modern sound has been opening eyes locally and has started to generate some regional buzz. Entice's first full-length album, Let The Fire Come, mixes solid songwriting, a lot of technical skill and a slick commercial sense that's aided by producer Scott Silletta. Entice they will.

Entice kicks off the set with Take A Number, mixing Alt-Rock guitar and New Wave synth sounds to create a sonically pleasing and slightly out of the norm feel. Vocalist Leland adds an urgent air to the music, driving at each song with incessant energy and a sense that he's just holding onto the rails. Take A Number is a great Rock radio song with a chorus that will stick with you. Tell Me There's More is a big Rock ballad that shows shades of Freddie Mercury and Chris Martin; the song is great Pop-Radio ready material without a lot of long-term lasting power. Let's Just Go leads with piano once again, burnished by a melodic guitar lead that evolves into a mellow Pop/Rock arrangement. The energy isn't as high here as on other tracks and this wasn't really a personal favorite, but the melody is strong and still stick with some listeners on that basis alone.

My Kind Of Disaster is flat out a great Pop/Rock song. The melody and rhythm actively work to burn themselves in your mind, and Leland is the consummate Rock front man here. The Freddie Mercury comparisons are never more apropos than here, even the sound of his voice on the CD suggests at least of that sound is electronic. Let The Fire Come has an elegance about it that's a bit unusual in Rock N Roll, harking back to 1970's Progressive Rock with serious lyric overtones. The song is a thing of beauty, bolstered by some great falsetto vocal work by Leland. Soon brings an overtly dramatic sense to Let The Fire Come, doing a long, slow build in intensity that bespeaks of the intensity of emotion behind the song. This is the most moving composition on the album, driven by its own sense of inevitability. All This Is Free carries with it a similar sense of power, a slow-to-mid-tempo tune driven by a wall of guitar sound and enigmatic vocals before spiraling down into nothingness in its final seconds. Who's Got Your Money is an emotionally and sexually charged tune built on a driven guitar riff and a sense of anger that is palpable. Let The Fire Come closes out with You're Infected, a slightly stilted song that lives on the edge of sanity. The piano-driven arrangement is gorgeous with it's gothic feel and big harmonies.

Entice comes along in an era when they've never been less appreciated. This is the sort of Rock N Roll that's too esoteric to make Pop radio, too lyric to make it on Modern Rock Radio, and just too good to go unheard. In the late 1970's or early 1980's, Entice would have been superstars. Their sound today is better than a lot of major label artists, but it takes time and work to get the sort of attention Entice deserves. Let The Fire Come is a bit unfocused as an album, but the individual songs are great and there is a sort of vague cohesion that comes about along the way. I recommend Entice's Let The Fire Come as a great listen that holds a few surprises for those who listen carefully.

You can learn more about Entice at www.myspace.com/enticetheband. You can purchase a download of Let The Fire Come through iTunes, or you can name your price through Bandcamp. Contact Entice through their MySpace page for information regarding potential release on CD.
Posted by Wildy at 5:00 AM