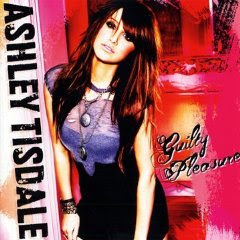 Ashley Tisdale came online as a teen pop princess with 2007’s Headstrong, parlaying that success into a vital and popular role in the High School Musical franchise. In 2009 she returns with a more “mature” solo album, Guilty Pleasure, in which Tisdale tries to show she’s all grown up by playing the bad girl. Working with top flight producers and songwriters such as Billy Steinberg (Madonna); American Idol’s Kara DioGuardi (Kelly Clarkson, Carrie Underwood); Toby Gad (Fergie, Beyonce) and Emanual Kiriakou (David Archuleta, Nick Lachey), with an edgier, guitar rock sound on Guilty Pleasure.

Guilty Pleasure opens with Acting Out, a song with great pop bite and the announcement that Tisdale is shedding her "good girl" skin. This is a great sound for radio, kind of like High School Musical meets No Doubt. It's Alright, It's Ok is also upbeat and peppy but a little too common sounding for the alt-Pop realm. Masquerade is catchy and lyrically dense with a stream of consciousness bent that will appeal to pop radio fans. This is probably a decent chart tune as it sticks in your head. Overrated is. Hot Mess is mindless and catchy; probably a big hit on the radio even though the songwriting is less than spectacular. The lyrics to this song are very young and driven with the message that Tisdale is a bad girl. How Do You Love Someone seems to try to give credibility to Tisdale's claims to being bad but instead comes across as the awkward poetry of a disaffected junior high writer. Tell Me Lies, Me Without You and Hair are all decent Pop tunes, while Crank It Up is a likely club hit. Much of the latter half of the CD is more like (occasionally decent) filler, but filler nonetheless.

Tisdale has an okay voice, yet the amount of voice correction work done here is oppressive. The production values on Guilty Pleasure are so high that as a work it begins to sound monochromatic. This is pre-packages pop aimed at the teen market but trying to transition into an adult persona that seems more contrived than real.

You can learn more about Ashley Tisdale at http://www.ashleytisdale.com/ or www.myspace.com/ashleytisdale. You can purchase a copy of Guilty Pleasure at Amazon.com, or download the album or individual tracks from iTunes.