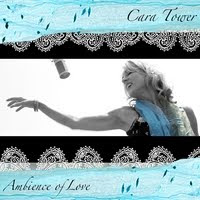 Cara Tower is a singer, multi-instrumentalist and composer for whom the process of creation never stops. A Southern California girl by birth, Tower has travelled all over the world chasing her muse. Along the way she has been a major label recording artist (Hollywood Records), an entrepreneur (Raw Dog Records) and a film composer among many other things. 2009 sees the release of Tower’s third album on her own imprint, Raw Dog Records. Ambience Of Love is full of positive, affirming songs and gentle arrangements.

Ambience Of Love opens with Even When, a song about overcoming obstacles and maintaining a positive outlook. It's a breezy pop tune that's 100% self-affirmation that acknowledges that life has a circular quality and that any rough times one goes through have happened before and will happen again. The implication, of course, is that the good times come around again as well. Love Is No Stranger opens with a voiceover that sounds like it's from a sermon and delves into a nice folk/pop arrangement with a moving bass line. The song itself is about giving yourself over to love and could just as easily be a love song as a song of praise (I left the song not being 100% sure which is intended). Why and Before There Was A Name both sound like meditations or perhaps even devotionals. The latter in particular is quite lovely. Courage To Change stays in the highly positive vein, challenging listeners to be the change they wish to see in the world. Flowers takes to a dance beat to explain the seeds of seeking universal standing in a bit symbolism that borders on cliché. Tower closes out with Appalachian Wind, perhaps the best tune on the disc. On the first eight tracks Tower has been focused inward; on Appalachian Wind she focuses on the world around her and the result is a haunting and beautiful tune.

Ambience Of Love is all about religion, philosophy and feeling good about oneself. With the exception of Appalachian Wind, the album feels more like a self-help book than a collection of songs. That being said, Cara Tower crafts pleasing arrangements around tried lyrics such that the album is a pleasant listening experience. Appalachian Wind shows that there's more to Tower as a lyricist than Stuart Smalley style proclamations, and hopefully we'll see more of that side of her on future releases.

You can learn more about Cara Tower at http://www.caratower.com/ or www.myspace.com/caratower. You can purchase a copy of Ambience Of Love at CDBaby.com.
Posted by Wildy at 6:07 AM