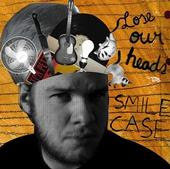 Ben Andress is not a coward. He ventures forth as a tone deaf singer/songwriter with a sense for good hooks and near-stream of consciousness songwriting. He's also the driving force behind Smile Case, an artist collective of one mind and multiple personas. The Canadian singer/songwriter/Pickle Pizza eater set forth with his debut album in July of 2009 called Lose Our Heads. The album was released by Andress' own Blacktop Records in Canada, and features some of the most fractured songwriting of the year, to date.

Lose Our Heads, the title track, is a diatribe about living for the weekend and plays like an imbalance co-worker revealing the unfortunate and un-hearable aspects of his social life. Up next is Motivational Speaker, a take on bravery with low expectations. There's actually a message about being yourself no matter what that is in there somewhere, but you might miss it in a composition that runs well under two minutes. Waking Up To Sunshine sounds vaguely like two bands practicing in adjacent rehearsal spaces and essentially repeats the same lyric for the full nearly-two minutes of the song. In Some Other City clocks in at a robust four minutes sounding once again like there are two distinct tracks playing at once. The guitar and voices sound like they might have been recorded in someone's bathroom, while the come-and-go strings (synth) sounds like it was done in a studio. The two are merged together in a surreal fashion but never really sound together. The vocal/guitar portion of the recording is pure Lo-Fi and includes what sounds like mistakes such as forgotten lyrics and missed queues at times.

Take Good Care My Brother And Sisters opens with a voice part from Jon Favreau's Swingers and seems to be about a game of chance over someone's sister before it devolves into an unintelligible storm of notes and garbled lyrics. 50 Below Zero is the sort of declaration almost anyone would make in such conditions set to music. Kim Kelly is simply unlistenable. Nothing is in tune, no one really sings/plays together and the words border on unintelligible at times. Life Of A Party opens with a snippet from Chasing Amy, easily the most understandable part of the song. Three Generations shows signs of wanting to be lucid but devolves as soon as Andress opens his mouth to sing. Andress is even more difficult to understand than The Gangsta Rabbi, Steve Lieberman. Lose Our Heads closes with The Art Of Losing Your Head, which opens with a line from Girl, Interrupted that is probably the most apropos statement on the entire disc.

Smile Case is a seriously demented musical project that borders on performance art. The presentation of insanity enclosed in Lose Our Heads is either a frightful diorama of madness or an attempt at a Jackass style send-up of insanity. Either way it's not a terribly pleasant listen. I sat through it for the purpose of giving it a fair listen but wouldn't choose to do so again. I don't have a strong opinion on whether it's good or bad, it's just so far off the chart there's not a lot to compare it to. Some who are more into the realm of musical masochism will definitely find this a treat. If you think Phoebe Buffay should have had a child with Gibby Haynes and taught him to play guitar and sing, then this would be your reward.

You can learn more about Smile Case at www.myspace.com/smilecase, where you can purchase a copy of Lose Your Head directly from the artist.
Posted by Wildy at 6:08 AM