Review: Lillie Lemon - Nobody To Thank 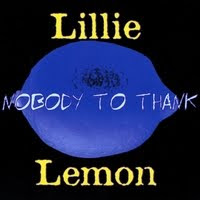 Lake Sheboygan, Wisconsin is a small town where being local still matters. That's why no matter how much she travels or tours, it's always Lake Sheboygan Lillie Lemon returns to. After teaming up with guitarist/co-songwriter Dave Durian in 2008, Lemon knew she had found someone with whom she had the right musical chemistry to write songs with. Their combined efforts make up Lillie Lemon's debut CD, Nobody To Thank. Lemon has a following of devoted fans called "Lemonheads" and a strong local network of fans, businesses and charitable organizations that have supported her and that Lemon continues to support, but as Lemon begins to look at the larger horizons for her music the future is uncertain.

Lemon kicks off Nobody To Thank with Water's Edge, a melancholic Folk/Rock tune with a minimalist bent and a stark sound. Lyrically the song is adrift, relying on repetition and short-range symbolism. To a lesser degree, It Was OK falls into a similar trap, with Lemon delivering verses that sound somewhat improvised and a chorus that repeats ad nauseum. Sinking improves Lillie Lemon's lot, coming off as a slow tune ala Edie Brickell. Home Road hits a more structured note; a fuzzy bit of Americana with a decent melody. Nobody To Thank continues in the vein of melodic melancholy thus far established with the title track. Fans of the Cowboy Junkies who always wished they'd go for a less polished sound will love Lillie Lemon, as the fuzz factor is still here in the guitar, but the downtrodden, mellow vocal style will strike real similarities to that of Margot Timmons.

Texlahoma Story is the clearest display yet of one the idiosyncrasies of Lille Lemon's voice. Her relationship with pitch at times is spurious; Although Lemon is never wholly out of tune she does appear at times to hear her own internal accompaniment. This is most notable in the latter part of phrases. The result is a bit harmonic dissonance that can be jarring for the listener. Lyrically, Lemon keeps things simple, sticking with conversation prose, almost as if she's transcribed journal entries on sheet music and chosen to sing them. The result is a collection of songs that vary in sound from pretty to nearly-falling-apart that lack any real emotional intensity. The Professor Song offers up a caricature of a young woman with boundary issues and little in the way of subtlety going for her. There isn't enough here lyrically to make the character real; just a few repeated lines that outline in brief what might be a fascinating story in music if it were told. Nobody To Thank closes out with Be Still, perhaps the best songwriting work on the album.

The stars just never align for Little Lemon on Nobody To Thank. Musically, the album never quite rises about Open-Mic Night at the coffeehouse material. Vocally, Lemon is passable but does have real issues with pitch (ala Edie Brickell) and the songs just don't have much to keep listeners coming back. Lemon has nice tone in her voice at times, but there just isn't a lot here that would make Nobody To Thank stand out in Indie Rock circles. There are folks out there that enjoy this sort of homogeneous, melancholic drone-rock, but even among that demographic this disc just might not make it.

You can learn more about Lillie Lemon at http://www.lillielemon.com/ or www.myspace.com/littlelemon. You can purchase a copy of Nobody To Thank at http://www.cdbaby.com/cd/lillielemon.
Posted by Wildy at 5:00 AM

I think she's from Sheboygan, not LAKE Sheboygan. Is there such a thing as Lake Sheboygan? I know that there's a Sheboygan Falls...