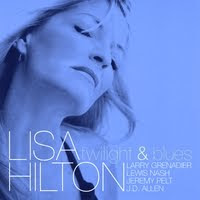 Twilight & Blues kicks off with the funky swing of Pandemonium. Piano, trumpet and sax shared melody chores, occasionally pulling together ensemble to offer moments of sonic resolution. Joni Mitchell's Woodstock finds Hilton leading us through a moody piece with a lot of inner turbulence that manages to rise above itself without losing that inner tension. What's Going On (extended take) is a soulful and respectful take on the Marvin Gaye classic. The trumpet in particular shines, and Hilton is as solid as ever on piano. Hilton gets inspired on City Streets with some of her hottest piano work yet. The rhythm and texture she builds into the song is supported by upright bass and percussion for six minutes of near-perfection. Joplin's Kozmic Blues has a cinematic feel to it, with a hopeful theme that rises out of what is initially a melancholy arrangement built on plaintive rhythms. Hilton finds a bit more magic in her interpretation of Moon River (Henry Mancini), punctuating the legato melody line with the occasional run or sparkle that adds extra life to the classic. Hilton closes out with the regular version of What's Going On, which may appeal more to listeners who want to hear the song as Gaye performed it but lacks some of the creative magic Hilton finds on the extended version.

What most surprised me about Twilight & Blues is that it never once comes across sounding canned, not even on the cover tunes. Schmitt is a genius at the boards, and Grenadier and Nash provide a spark against which Hilton rises continuously. Hilton is obviously quite accomplished, and she gives some of her best recorded performances on Twilight & Blues, digging into a creative well that runs the length of her career and deep into her childhood. I highly recommend you take some time and spend it with Hilton and Twilight & Blues.

You can learn more about Lisa Hilton at http://www.lisahiltonmusic.com/ or on Facebook. You can purchase Twilight & Blues as either a CD or download through CDBaby.com.
Posted by Wildy at 5:10 AM