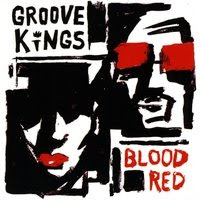 Montreal Blues duo Groove Kings is back with an exciting album full of Blues, Rock and R&B entitled Blood Red. Songwriter/guitarist/producer Howard Forman came across vocalist Irene Marc a few years back when she asked to sit in at a gig. The rest, as they say, is history. Marc blew away the room with a rendition of Chain Of Fools, and the gig was set. Groove Kings made a name for themselves in their native Canada with several albums, charting singles and even a CTV television special before taking some unstructured time to focus on other things (for Marc is was family, session work and a tour with Cirque Du Soleil's Allegria, while Forman became a top-selling world musician and as nominated for two Genie Awards (Canadian Oscars) for Best Song In a Motion Picture. Now Groove Kings are back, picking up right where they left off with stellar writing, outstanding musicianship, and a voice, in Irene Marc, that will stop people in their tracks.

Blood Red opens with the soulful and sultry titled track. Have an extra set of speaker wires in case Irene Marc melts yours; the vocal is classic and the arrangement fits around her perfectly. Real Love hits more of a 1970's Disco swing, providing a healthy dance beat, smooth harmonies and a horn section that's to die for. Temporary Man is a dark soulful groove with jazz accoutrements and a killer harmony that will haunt you. I actually didn't quite catch on to this song the first listen through, but it's grown on me and become one of my favorite tracks from the CD. Chore is a throwback song in some ways, the protagonist keeps time with a number of gentlemen because she doesn't have the one she wants, but tells the one she'll leave them all behind for him. It's an interesting tune, reminiscent in style and tenor of the great torch songs but updated for today.

I'm The Rain is a kittenish tune in the style of classic jazz vocalists. Marc is devilishly good here, and Forman's guitar work is absolutely exquisite. That Lie finds Groove Kings rocking out with a serious soul vibe in a song that Aretha Franklin would deem worthy. Blood Red takes a turn for Country/Rock on Bury Me. A Rhythm & Blues beat and hints of slide guitar work make this the most exciting song on the disc. It becomes clear that Groove Kings can and will play anything they want, and well. This tune could cross over to country radio with no difficulty whatsoever. So Real To Me sounds like a modern power ballad; the harmony is uplifting and catchy. This is the sort of tune that aging hair bands pull out every couple of albums just to prove they can sell records. Blood Red closes out with What's Real, a slow starter that's a Southern Rock tune with blues and a classic R&B (think Tina Turner, Aretha) chorus.

Blood Red is one of those albums that didn't really hit me full force until the second or third album, but now I don't want to put it down. Irene Marc is a singular talent, as good as almost any similar styled vocalist in music. Forman is the perfect complement, writing and arranging to wrap around her voice in a perfect fit every time out on Blood Red. Groove Kings are a real treat. Don't pass this one by!

You can learn more about Groove Kings at http://www.groovekings.ca/. You can purchase Blood Red as a CD through www.cdbaby.com/cd/groovekings3.
Posted by Wildy at 5:10 AM