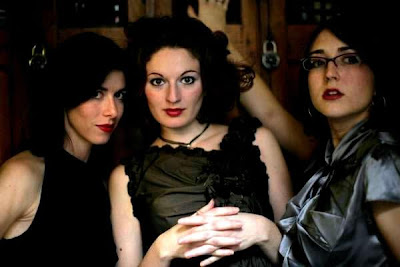 Sometimes you get into the middle of the recording process and simply realize the sound isn't working for you. That's what happened to Jessie Murphy, then a Masters in Music candidate at Columbia University in New York City. She approached two classmates, Marcia Wood (Wurlitzer, flute, clarinet, harmonica, pan pipes, vox) and Amy Wood (horn, cajon/percussion, flute, melodica, autoharp, vox) and asked them to come along for the ride, not realizing the instant chemistry they would find playing together. From the ruins of one project a primal force of Chamber Pop was born in Jessie Murphy In The Woods. The band has toured the UK (with a feature spot on Cambridge University Radio) and played dates all across the United States. Their first venture into recording together has resulted in Eight Belles, an EP that began making the rounds in mid-2009. Eight Belles holds the magic of a fairy tale and the promise of a troubadour, all wrapped up in the beautiful, gothic tapestry of music woven by Jessie Murphy In The Woods.

Eight Belles opens with New York City Lights, a love-song from Murphy to her constant companion and best friend, the city in which she lives. Murphy's voice is mesmerizing, and the harmonies coming from the Woods create moments so palpable they are almost frozen in time. In The Woods is a song about discovery that could be a metaphor for musical experience of the band, personal experiences, relationships, etc. The lost feeling perhaps implied by the title quickly slips away in the wake of a sense of wonder and an exquisite arrangement that's more Baroque than Pop. Owen Wilson uses a bit of humor to honor all those whose passion or talent drive them to the edge and beyond of societies expectations. When I Am A Horse Again is one of the more unusual musical allegories I've come across, recalling a perfect childhood moment and yearning for the sort of perfection we only know once. Written in a form of lyrical prose, When I Am A Horse Again is strong on imagery and may lose you if you try to get too analytical with the lyrics. Perhaps the biggest surprise on the disc is Eight Belles, a tribute to the horse who nearly took the Kentucky Derby away from Big Brown in 2008 until her ankles gave out. The horse was euthanized but gains immortality in a touching and beautiful song with a melody that's destined to be considered "traditional".