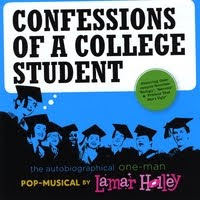 Lamar Holley has a unique gift; a love of melody and harmony that transcends music and becomes pure creation. Since playing to sold old shows as a 16 year old in his basement bedroom to today, Holley has continued to create out of love for music. With a distinctive love for classic Pop/Rock and theatrical music, Lamar Holley’s debut album, the Pop/Musical Confessions Of A College Student hits all the right notes.

Confessions Of A College Student opens with the Ben Folds-esque Biology, a philosophical discussion of Biology vs. Cosmetology that any current or former freshman can identify with. Forgotten Friends goes with a 1960's Pop feel that will have you swaying in your seat. It's a sweet reminiscence about the people who were so significant during college who have faded from memory and prominence with the passing of years. Secretly is a musical soliloquy on unrequited love that is sonically reminiscent of Moxy Fruvous. The persona implied by the song has the sort of puppy-dog-turned-unlikely-hero who would make a great lead character. Pretend That She's Ugly has a distinctive Ben Folds feel to it; it's about a guy who tries to assuage his ego over a rejection from a girl by pretending she's something she's not. The song turns from sour grapes to hopeless optimism before it's done.

This Is True travels down the Dixieland jazz path as the lead character puts himself on the line to the girl he adores. It's a declaration of love in spite of the reality of any apparent chance to get the girl he wants, and the sort of song that will infect your brain for days. Around Me is a sweet song about the inner life of someone in unrequited love. I kept envisioning Muppets singing this song, for some reason. The more I hear the album I picture being staged with puppets ala Avenue Q. Lovesick continues the primary theme of the album with the lead character continuing to yearn for not only his chosen one but also anyone else attractive who crosses his path. Flower slows down both the tempo and emotional rancor and reflects a newfound seedling of emotional maturity. The character speaks of his love in allegorical terms that reflect understanding of both her and himself, even if in rudimentary form. The album closes out with the brief Graduate With Honor, a doo-wop track that might be worth expanding upon and including in a production of this show. The brief 39 second snippet included here reflects just the comedic and stylistic sidebar a show of this nature needs.

Lamar Holley has crafted a musical with real potential in Confessions Of A College Student. There's a real heart to the musical, although it probably lacks the cynicism or world-weary self-knowledge to interest Broadway crowds. Confessions Of A College Student carries with it the light and airy feel of 1950's and early 1960's shows and is a legitimate foray into the musical world. If Holley continues to develop the book of this show and expands the song selection and story line he may just have something big here.

You can learn more about Lamar Holley at http://www.lamarholley.com/ or www.myspace.com/lamarholley. You can purchase a copy of Confessions Of A College Student from CDBaby.com.
Posted by Wildy at 6:23 AM

I have been visiting various blogs for my term papers writing research. I have found your blog to be quite useful. Keep updating your blog with in valuable information... Regards